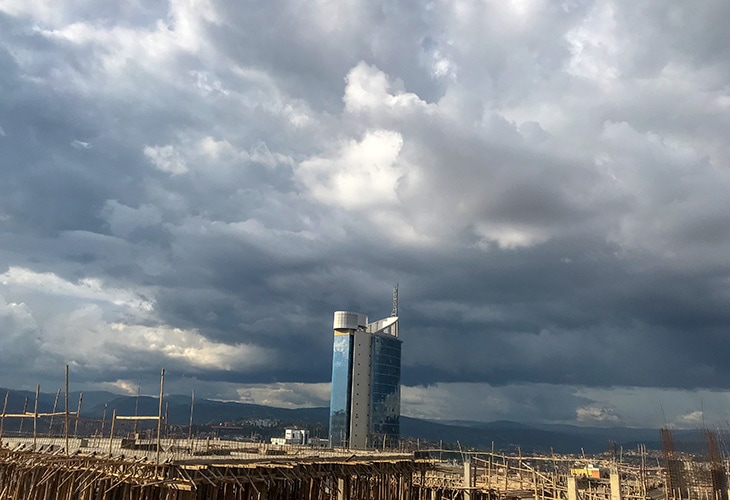 There are a couple of important things to say about the weather in Kigali. First, it has the best weather in the world (my opinion only, of course, but shared by many… at least five other people). Second, no matter how many years a foreigner has lived here, none really seem to remember exactly when the rainy seasons start and finish (at least nobody I’ve asked… again, at least five people). The seasons have confused me for the two years I’ve been here. Below is my attempt to make some sense of the weather madness based on my personal experience and some conversations with folks who’ve been here a lot longer than I.

There are two glorious dry seasons in Rwanda full of sunshine and mostly cloudy skies. One runs from around November until early March and the other from about June to September. When I arrive in July 2010, I was treated to two months straight of sunny weather without a cloud in the sky. The temperature if you were out in the sun was hot, but not unbearable, but the shade was perfect. True, the lack of rain meant some dusty days where breathing wasn’t all that enjoyable. Great for tanning, not so great for traversing Kigali’s steep hills in work clothes.

From January until early April this year, the rains mostly stayed away. There’s the occasional short shower and some cloud cover but, for the most part, the weather has been hot and sunny. Sitting in the sun for any length of time can become a sweaty affair but hanging out in the shade is fine. It’s hot but it’s nowhere near as bad as what you’d experience in Tanzania or Kenya. I don’t even think it’s as bad as the ridiculously humid summer weather I grew up with in Southern Ontario (which I’m told is a lot like the summers in the DC and NYC areas). It’d be nice if there was a beach closer to Kigali but I guess we can’t have it all, right?

Bring some light clothes as it will be toasty. Shorts and short skirts aren’t really the done thing here, but capri pants, dresses, longer skirts and pants made of light material are fine. Sleeveless tops are ok too. Don’t forget your sun lotion as it’s expensive here and sometimes hard to find. Sunglasses and a good hat and all of the other sunny weather stuff are recommended as well.

Likewise, there are two rainy seasons in Rwanda – big and small – that slot in in between the two dry seasons. The big rainy season goes from around late-March until about mid-May but this can vary by a few weeks sometimes. This year’s season, I’m told, started a bit late in mid-April and has been dragging on into May. The small rainy season is from around late-September until November. The difference between the two rainy seasons is that the ‘big’ rains that come earlier in the year tend to last longer (it’s not unusual for it to rain all day, four or five times a week) whereas the ‘small’ rains tend to only be for a few hours in the afternoon and leave you with a beautiful day for the rest of the time. The big rains will screw with your plans and piss you of whereas the small rains will annoy you for a little while but clear the air and then leave you with a sunny sky. At least that’s the theory.

So now it’s May 2012 and here I sit, in the midst of the big rainy season. True to its title, it rained very heavily almost all night last night, starting at about 10pm and continuing until about 9am the next morning. But it’s 3pm now and the sky is blue with fluffy clouds. The internet tells me that it’s 20C with 88% humidity. I’m not sure what 88% humidity is supposed to feel like but I wouldn’t imagine it’s like this. The weather is pretty much perfect for me. No mugginess, slightly cooler than normal but I could still get away with wearing a skirt and a sleeveless top. It’s nice.

But don’t be fooled! While I would never dream of leaving the house before 8am, most people in Kigali have real jobs and I’m told that it is really cold at those ungodly morning hours. While I can’t vouch for the mornings, I can say with certainty that evenings this time of the year can get pretty chilly. We’re not talking winter coat and gloves type weather, but you’ll be very cold in flip-flops, open-toed shoes, skirts, skimpy dresses, sleeveless tops etc. So, if you’re planning on being in Kigali at this time of the year, have some warm clothes in your luggage. It gets cold.

A light scarf is handy not only for protecting your neck from the chilly evening weather, but also as a guard against the sometimes-slimy motorcycle helmets you’re bound to encounter if moto taxis are your preferred mode of transportation. A good-quality umbrella is also a smart buy as is a lightweight rain jacket. Wellies are probably overkill but if you plan on braving the torrential downpours (instead of hiding out until the rain stops like the rest of us) then bring them… along with rain pants. And maybe snorkel gear. When it rains hard here, it rains HARD. If you don’t have your snorkel, just hide out with all of the Rwandans under bus shelters or in shops and wait for it to stop.

So, all up, the weather in Rwanda as a whole is amazing. A bit wet at times, but the dry, sunny days more than make up for it. Places in the west tend to be colder and wetter so, if you’re heading to the hills, keep this in mind. But, as far as I’m concerned, Kigali has the best weather of anywhere I’ve been in the world. Something to look forward to! Just make sure you prepare for the wet times and bring some sunscreen for the dry seasons and you’ll love it.

4 thoughts on “Weather in Kigali”