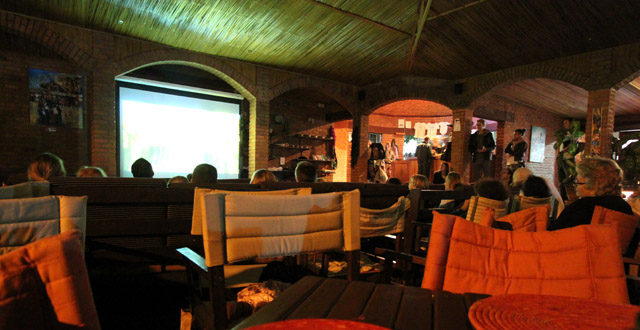 Some people might say Kigali is a bit of a sleepy city, others might consider it boring, others still might call it ‘excitement-challenged’ to be politically correct. Ok, the last one is a lie. I’m sure nobody has ever described it like that. Maybe. But I think we can all agree that Kigali is the sort of place where you have to make your own fun.

For antisocial hermits like me, this means a lot of nights curled up with my hard drive, computer, a friend or two and some movies of questionable quality. But watching movies at home can get old and the movie selection gets sparse and occasionally the hermit in me craves some sort of contact with the outside world. Fortunately there are a few movie watching venues popping up around the city and this article is your guide for finding them.

Check our Kigali events calendar and Facebook page for information on what movies are playing where. Or – in case I forget to add this information which is entirely likely – check in with each place’s Facebook pages (listed below) to get the movie info straight from the source.

The original movie night in Kigali? I’m not 100% sure on that but they’ve been showing movies on Saturday nights for the two years that I’ve been here. Well, they’ve switched things up a bit and have moved from their usual Saturday ‘movie night’ to a ‘cultural night’ which means that they aren’t showing movies each weekend. Sometimes it’ll be a movie and sometimes it’ll be live music or a wine tasting or art show or other other fun event.

When they are doing the movies, they generally start at around 6:30pm if they’re showing a kid’s movie and 7:30 or 8pm if it’s just the one movie. The setup is good and the movie quality and sound are usually spot on. It costs Rwf 2,500 and the price includes popcorn and they’ll often have an extra kiddies movie thrown in for the same price. Get there early to get one of the comfy couches up front.

This is a newer addition to Kigali’s movie nights. Last week’s offering was some Eddie Murphy movie which, for me, doesn’t really bode all that well for their taste in movies. But that’s just me hatin’ on Eddie. I haven’t been to their movie night yet, but I did watch a few movies here during the 2011 Rwanda Film Festival and I really liked the setup. The picture was clear and large, the sound quality was pretty good, the seating up front is pretty comfy and the venue isn’t so huge that you’ll be too far to see much. Providing they give me a non-Eddie movie choice then I’m looking forward to watching something there soon.

The Goethe-Institut in Kacyiru always seem to have interesting movies showing, usually with a German connection somewhere, but not always. I’ve seen a few really interesting movies here and think the setup is really great. The picture is huge, the sound is good and there’s about seating for 100 people, I’d guess. It can be pretty popular so get there early to get a good seat.

If you’re saying to yourself ‘I really feel like I want to explore the world of Korean cinema’ then you’re in luck! The Korean Embassy in Nyarutarama shows weekly movies. But if you have a job, then you’re probably out of luck as the movies are show in the afternoon. The movie starts at 2:30pm but is introduced with a half hour of Korean music videos so get there are 2pm is you want to catch up on the Korean music scene. They’ve only got seating for about 20 to 30 people so arrive early.

There’s a movie theatre in Kigali! Except… it doesn’t have any movies. That I know of, unless something has changed since my last visit. But that’s ok because you can BYO movies and rent out the theatre as long as you have a small group of friends (or are willing to pay for a small group, even if it’s just you on your own and you happen to want to watch a movie while sitting on red velvet seats in a cinema for 100 people). I’m afraid this one has always been a bit of a mystery. Sometimes you can show your own movies, sometimes there are football matches on, sometimes the projector is broken and sometimes the guy in charge is impossible to locate. But if you’ve got your heart set on using the cinema (and you should give it a go – it makes for a fun night out) then head over to Nyamirambo a few days in advance, look for the dude who’s in charge (probably hanging out in the popcorn area that doesn’t actually sell popcorn), make some plans and get his number.

Do you know of any other venues in Kigali that are showing movies? Let us know in the comments below.

9 thoughts on “Watching Movies in Kigali”