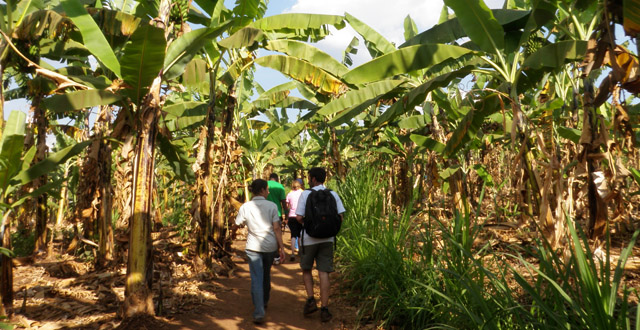 HHH are a group that started way back in Kuala Lumpur in 1938 by some British officers and expats looking for a bit of exercise mixed in with a bit of socialising. HHH has been described as a ‘drinking club with a running problem’ which should give you a bit of an idea of what you’re in for. It’s something that can be found all over the world and, at last count, there were around 1,700 HHH groups worldwide. It makes a great way for new arrivals to a place to meet people (expats and locals alike) and have some fun while seeing a bit of their new city.

Kigali is city blessed not only with amazing natural beauty, but also with plenty of bars scattered around town. A perfect HHH combination. ‘Hashers’, as they’re called, meet at a different starting point each Saturday at 4pm. You can find out where it’ll be by visiting their Facebook page. There’s a bit of an introduction and the hashers who have set the course give a little talk about what to expect. Each Saturday’s route is different and is set out by a different person or people each week. The route is marked by small shredded pieces of paper (called ‘shreddies’) and it’s up to the hashers to follow the route using teamwork to get to the end. Yes, you’re following paper. Yes, it’s bizarre.

The Kigali Hash has routes for runners and walkers so if you’re not up to tackling those Kigali hills at speed, you can still come along for a nice, leisurely stroll. The Hash will usually finish either at someone’s house or at a local bar where beers and brochettes are consumed. Hashing has a whole ritual thing behind it with some frat party, hazing type elements mixed in with random dirty songs. New arrivals to Hash will probably be a bit lost at first as the regulars sing along to songs led by Rambo, the leader.

If it’s your first time Hashing you will be singled out and made to chug a beer (or pop) in front of the group and say a few things about yourself. Don’t worry, you won’t be alone up there as there are various acts that will also mean a beer chugging punishment. Everything from missing more than two hashes in a row to wearing sandals to having new, un-scuffed shoes.

Once all of the rituals are over and done, it’s time to relax with a beer and a brochette and get to know some new people. The Kigali Hashers are a friendly bunch and it’s a great way to meet some friends if you’re new to town and feeling lonely. If you go to a bunch of hashes you’ll probably end up seeing all kinds of hidden corners of Kigali as well which is another bonus.

Exercise, beer, getting yelled at, and beautiful scenery… it’s certainly a different way to spend a Saturday afternoon!