Getting to Jinja to go whitewater rafting on the Nile is trickier and more expensive than other weekend options, but if you’re looking for action, this is the choice. The post-rafting reactions ranged from “exciting!” to “the worst experience I’ve ever had” depending on how comfortable you feel in the water.

There are a couple unique characteristics that make the Nile a fun rafting river. One is that it’s very deep, so you don’t need to worry about hitting rocks if you fall out. Most American rafting is more dangerous even if the waves are smaller, because you might hit rocks. Because of this, the guides aren’t hesitant to let the raft flip over on the rapids, so you are pretty much guaranteed to get dumped in the water multiple times. You might drown, but you won’t hit a rock. Also, the water is warm so it’s really comfortable to swim.

We booked with Nile River Explorers as they were recommended as being very professional and they make everything about the trip – transportation, lodging, food – conveniently packaged and planned. There are two other companies, Adrift and Nalubale. I don’t know their package details, but all three companies run the same rapids.

There are three options to get to Jinja which is a couple hours east of Kampala: fly to Entebbe ($199-$320 r.t. depending on Rwandair promotions), take a bus to Kampala (Rwf 6,000 on Jaguar Coach, 8-10 hours) and on to Jinja, or rent a car and brave the ridiculously insane Ugandan drivers. Some friends who rented a car ended up driving all night (12 hours to Jinja) and said it was more exhilarating/terrifying than the rafting, so be warned.

If you book rafting ahead of time with Nile River Explorers, there are two places to stay in Kampala that their free shuttle picks up at: Kampala Backpackers (closer to Entebbe but picks up at 6:45 am), or Red Chilli Hideaway (7:30 am pickup).  Both are lively traveler hostels with shared dorm rooms or private rooms for around $20 a night.

When joining up into raft groups, your guide will ask whether you want to have a crazy or mellow day. If you choose crazy, you will take the biggest rapids head-on, and most likely will flip over on at least three of them. Flipping over can be a little sketchy – I took an oar handle to the head on one, and one guy was stuck underwater under the raft for too long than he would have liked, but it really is phenomenally fun and exciting. If you choose mellow, you’ll try to avoid the biggest part of the rapids, but still might flip once or twice. If you want an exciting day, definitely try to avoid getting on a raft with anyone who wants mellow, or you’ll be looking over longingly at the groups high-fiving after surviving another exhilarating flip.

The rapids start immediately with an 8 foot waterfall drop, and then there are about 10 other rapids, three or four of which the guide says are Class 5. Although their rating system is far too liberal, the waves on some of the rapids, where the water takes a big drop and then ramps back upward, are huge. There are long lulls of calm water between rapids, so you have a lot of down time for snacks, swimming, bird-watching, etc .

With Nile River Explorers, we paid $125 and didn’t have to worry about planning anything. The shuttle picked us up from Red Chilli Hideaway in Kampala and went straight to the Jinja office for 9:30 am orientation and breakfast. We then jumped on trucks to drive 45 minutes to the raft launch. After exiting the water around three-o-clock, there’s a great barbeque already set up near the riverbank, with free beers included. 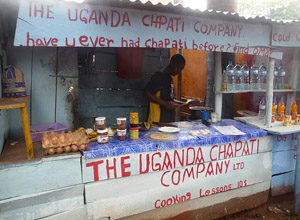 From there, you can either take a shuttle straight back to Kampala, or stay on a truck to the Nile River Backpackers camp right on the river. If you’re okay with a 4-person shared room, one night is included in the rafting price.  It’s a beautiful setting and gets rowdy every night with the guides and the other rafting muzungus downing beers on the patio.

Also at this camp, by the exit near the road, is a dude named Omar making the best damn chapatti concoctions in East Africa for absurdly low prices (#4 – egg/potato/cabbage/avocado/onion – heaven in your mouth – for $0.80). 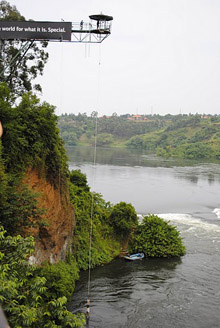 Instead of rafting, you can go down the same huge rapids by yourself on a boogie board. They call this riverboarding. It sounds crazy but… well, it is crazy. I didn’t get a chance to try it here but I did it on the Zambezi River, which is very similar, and it’s pretty insane. As long as you keep a death grip on the board, it should be safe. On some of the rapids you can even try to surf by going backwards into the uphill part of the wave and using gravity to stay on. Nile River Explorers offers a 1 day rafting and 1 day boarding package, although a half day of each would be a better offering because otherwise you go down the same stretch of river. They might also run a 2-day trip down different parts of the river if you have at least 3 people.

Also near Jinja, you can do a 44m bungee jump over the Nile. It’s run by Ascent River Adventures and is $80, or $70 if you go rafting with Ascent.  There are other tourist options like the Nile Brewery Tour and seeing the source of the Nile (apparently unexciting).  And if you want to fulfill your sick dream of risking another man’s life, there’s a Class 6 rapid (ie: unraftable) where you can apparently pay a local guy to go down it holding only a jerry can for survival. ` 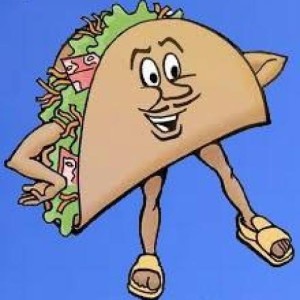 Cody is in Rwanda for four months as a volunteer consultant on technology projects for Technoserve’s East Africa coffee initiative. Previously he was managing mobile products (apps and websites) for companies like MySpace. In Kigali he recommends the Shake N Sip veg aloo burger, Sundowner nyama choma, football matches and chewy brochettes at Right Vision, and aerobics classes at the Amohoro Stadium gym. His personal blog is http://www.asthewater.wordpress.com.