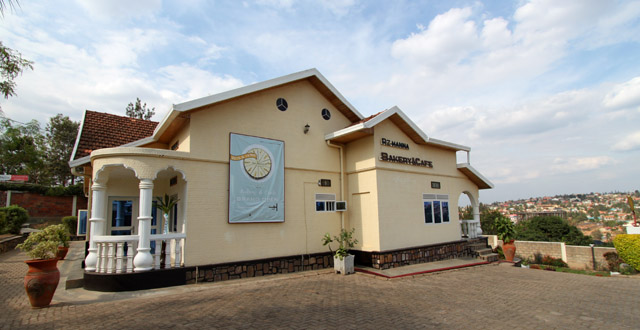 Rz Manna has downsized and become a small a bakery in the back of this building.

There’s a new cafe slash bakery in town and these guys aren’t messing around. The Koreans have thrown their hat into the Kigali cafe world and they’ve done it in a big, professional, welcoming, smiley-faced way. Rz Manna has been set up by nine Korean partners with the support of KOICA and Handgong Global University in Korea.

The name is pronounced ‘Roz Manna’ which, I’m told, means something that I forget in Hebrew. Then I was told that it’s something from the bible. Is this is yet another Jesus-affiliated Kigali bakery? I’m not sure. I prefer my cake without a side of God but with the deliciousness they’ve got on offer, I’m willing to happily play along and I think I have a new favourite Kigali cafe. Too bad it’s all the way over on the other side of town but it really is worth making the trek. 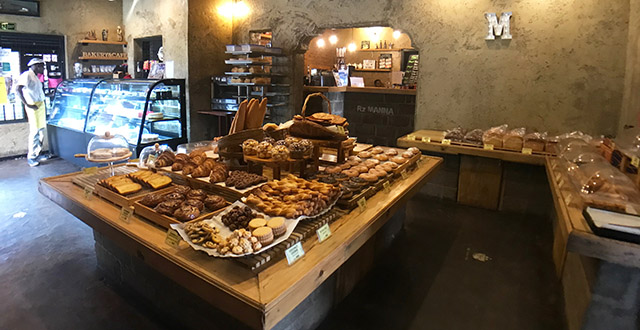 The first time I was there they, and the rest of the area, were having water problems and there was no coffee on offer. I opted for a strawberry and banana smoothie and a piece of mocha cake. The smoothie was think and flavourful and the cake was good as well. Neither were things I’d go out there specifically for, but my first sampling of food at Rz Manna was a positive one. It’s the service there that made me want to come back for more. The place is packed with staff, everyone smiling. There was even someone opening the front door to new arrivals. The counter staff taking the money were efficient and knowledgeable and the kitchen (that can be seen from the ordering counter) seemed to be working well. The problem is that almost everyone working there on my first visit was Korean. 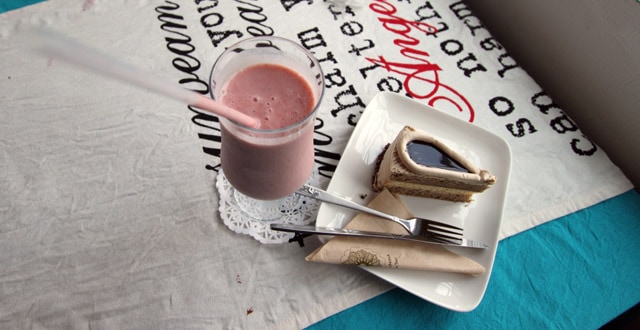 On my second visit the staff had been swapped over and the place was being run completely by Rwandans. Not a Korean in sight but the service was just as good as the first time I visited – door opener, smiling faces everywhere, quick service at the counter, fast delivery of delicious things without any surprises. Very impressive when compared to my experiences at almost every other restaurant or cafe in the city. I don’t know what kind of magic tricks the Koreans have up their sleeves (Fair wages? Decent training? Strong, supportive management? …madness!) but Rz Manna are doing something right and the fantastic service is a reflection of that.

Even when the service isn’t so good, it’s hard to get too cranky. The second time I visited I ordered a coffee with some cold milk on the side. The little cup the milk came in was impossible to pour without spilling everywhere and the coffee mug was way too full to fit any milk anyway. The server spilled the milk everywhere and then told me the coffee was very, very hot as he hovered it over my legs, serving it with shaky hands. It was slightly terrifying for my legs. Then he offered me a straw. But the entire episode was done with such a huge smile that I couldn’t help but feel like the whole thing was more cute than anything. The ‘the service isn’t great, but at least they’re trying’ thing doesn’t usually work with me in most places but add a huge smile into the mix and it’s hard to find things to seriously complain about. Yep. It’s that easy to win me over. 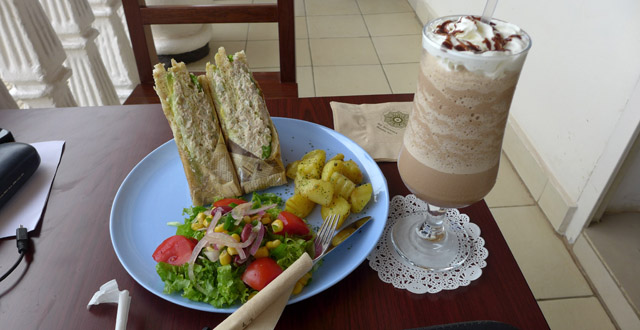 On my second visit I also discovered Kigali’s best tuna sandwich (Rwf 3,500 including sides). It’s a triple decker on lightly toasted bread (which adds a certain ‘something’ to the overall taste) completely crammed with delicious tuna. It’s pretty mayonnaisey which I like but might not be to everyone’s taste. Add some avocado, lettuce and pickles (the reason I think it’s so damned tasty) and you’ve got a very fine sandwich, indeed. The salad and potatoes were an ok addition but I found that it make the meal a bit too large for me for lunch. I’d prefer the option for a cheaper price and just the sandwich but, for the moment, it’s a package deal. You can also get a pre-packed lunch box for a quick takeaway. Ah Rz Manna… is there anything you can’t do?

Overall the prices here are about on par with Bourbon but I think the quality justifies the price in most cases. Bourbon’s cakes are dry and horrible, Rz Manna’s are not. One example of the high cost is their strawberry tarts that are half the size but twice the price of the Umubano bakery’s. So go in expecting high prices but good quality and you won’t be too shocked. They’ll have to keep the quality up though as Umubano is an affordable alternative but they can’t come close to competing with Rz Manna’s selection.

My latest visit also gave me a look at all of the new bakery items on offer, most notably the doughnuts. There was a stack of them on display and they looked and smelled great. Next time I will eat you, doughtnut. The signboard with times for the next round of fresh breads is a nice touch, as are the free samples to try out new things. I had a little sampling of one of their ciabatta which was great but I haven’t taken home any of their breads and goodies yet, so I’m not sure how they are. It’s actually more of a bakery and a drinks place than a lunch spot, so I’ll have to give the baked section a go next time around. 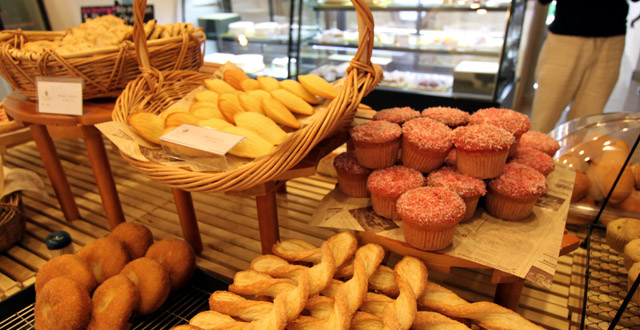 Rz Manna is located in a large house-style building not far from RDB on the road to the MTN Centre in Nyarutarama. There’s a nice view but the balcony is small so you only get to take it in if you manage to scam one of the two tables outside. Inside it’s sort of a funny setup spread across several smallish rooms but it works nicely and it gives the place a cozy feel. The tables are freakishly low which makes hunching over a laptop for even a short amount of time kind of uncomfortable. So if you’re hoping to stick around awhile to take advantage of their free wifi (which was fast when it worked but with an unreliable connection both times I was there) expect a sore neck at the end. But maybe it’s just a genius ploy to keep the hoards of laptop-toters away to which I say: Well played, Rz Manna, well played.

I was particularly partial to the 60’s folk music playing quietly in the background. Sipping a strawberry and banana smoothy is just made that much nicer when you can sway along to ‘This Land is Your Land’. The second time I went they were playing some classical music softly. It’s all very soothing and lovely. Even the toilets are lovely… they have smiley faces on them. Smiley faces on toilets! It’s just a wonderful, wonderful place.

Ok I’m going to stop gushing now. I really like this place and I’m thinking about their tuna sandwich as I type this. I’m trying to think of reasons I need to venture out to Nyarutarama. But really, Rz Manna is reason enough. Ok, I’m still gushing. I’ll shut up now and let you try it out for yourself.