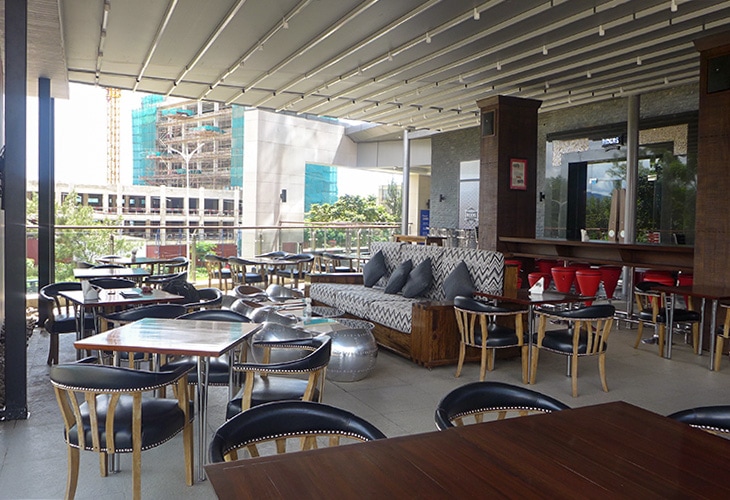 It seemed to take a long time to finally open its doors, but Rider’s Lounge was the final piece of the restaurant puzzle on the second floor of the Kigali Heights. Its windows were still wrapped up in paper long after the rest of the places opened which made it feel a little mysterious, but it’s been in operation now since April and it’s a pretty good place for a drink or some relaxing with friends.

Rider’s Lounge is a Ugandan chain and in Kampala I’m told it’s treated there more like a bar/lounge type place than a restaurant. I think the menus are very similar (besides some nice additions for the Rwandan palate with brochettes, kachumbari, and sambaza) but in Kampala people are more likely to go there for drinks than for a meal. A friend says it’s popular with the ‘see and be seen’ crowd of middle aged ladies who book a table and order bottle service. I haven’t been yet in the evening, but I’m pretty sure it’s not quite there yet here in Kigali. 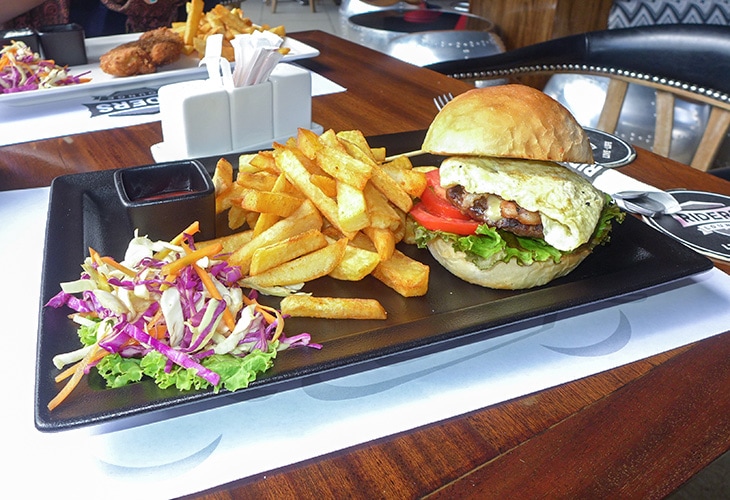 For me, I like Rider’s Lounge for lunch and a quiet place to work. It doesn’t seem like it’s taken off as a place to eat in the afternoon but I really enjoy the atmosphere, the airy balcony with lots of seating, and the decent wifi. You’ll often find me parked here with my computer instead of fighting for space over at the super popular and busy Java House. Plus they’re open 24 hours, seven days a week so if you’re someone who keeps odd hours, this is the place for you.

The menu here is pretty diverse with a good mix of things along with typical pub type food. Nothing I’ve had so far has blown me away, but everything has been ok and most things are pretty good value as well. They do a good job with their fries and they even whack a fried egg on their beef burger (Rwf 6,500) there in case you’re feeling extra hungry, though it looks much better than it taste. It’s ok but nothing super special. 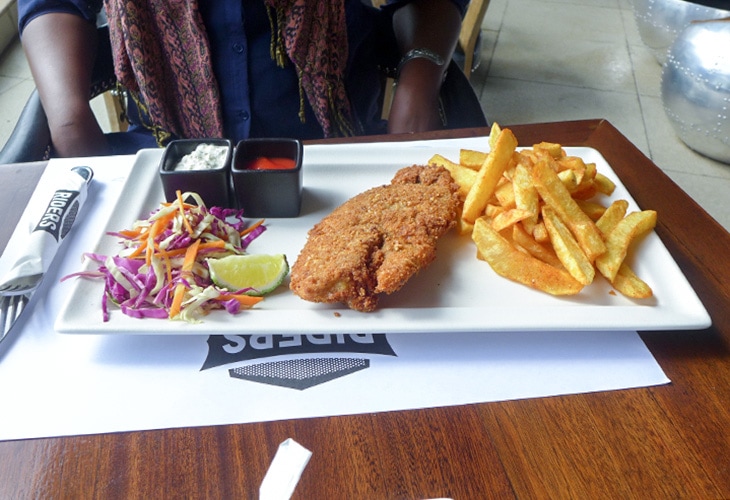 A friend had their fish and chips and it’s the only place I’ve seen that offers bread crumbed fish instead of beer battered. I think most people prefer beer battered so be aware of that, but I actually also like a crumbed fish from time to time so this is a good place to come for that though at Rwf 9,000 it’s pricey.

Rider’s also has all of the usual dishes found around town like a selection of pastas and curries (Rwf 7,000 to 9,000) and the usual brochettes and other meaty offerings. They also have a surf and turf option (Rwf 10,000) and they’re one of the few places in Kigali where you can get salmon (Rwf 22,000) if you’re willing to splash out. Which I am not. 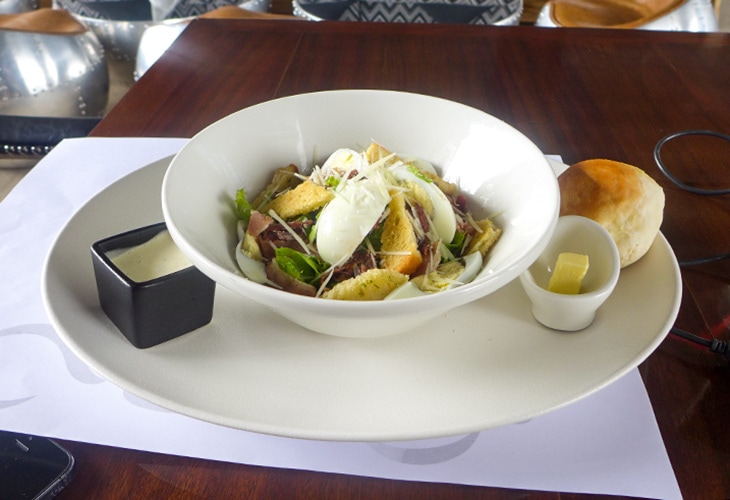 Greek and Caesar salads are the two menu items in Kigali that have caused me the most sadness over the years. I should know by now that ordering either of these things and expecting something good is foolish. Well friends! The Caesar salad at Riders Lounge is something I would order again. In all of my years in Kigali of ordering Caesar salads in vein, I think I’ve only ever said that about The Hut, Turambe Shoppe, and The Marriott so this is quite a momentous occasion. The salad doesn’t seem very big for the Rwf 6,000 price tag, but it’s packed with quality ingredients and it filled me up, so I can’t complain. The lettuce is, of course, the usual Kigali lettuce seen in every salad without fail. No romaine, but expecting romaine lettuce is going a step too far in dreaming. But the bacon is seriously delicious, the Parmesan is legit, the croutons are crunchy and tasty, and the dressing seems pretty close to the real deal. 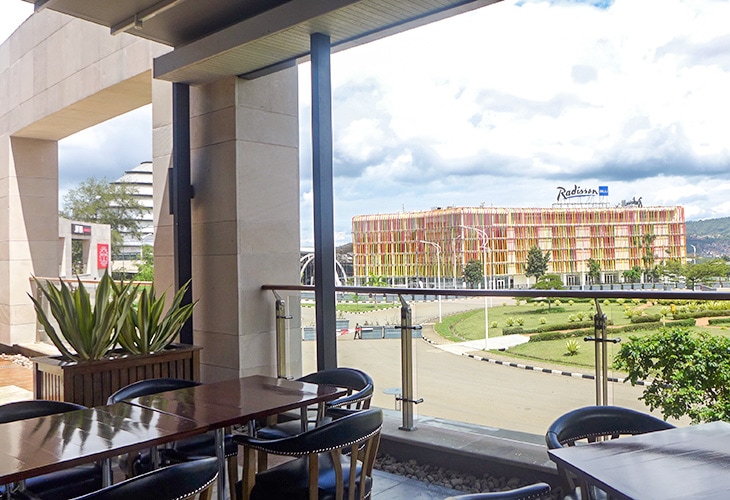 Their other salads are pretty interested as well with chicken and apple (Rwf 6,000), tuna and mango (Rwf 7,000), and avocado and mango (Rwf 5,000) which all sound appealing. They’ve also got soup (Rwf 4,500) and a good selection of sandwiches. Their chicken soup gets good reviews for a few friends who’ve tried it and I’ve noticed that it’s a popular choice with other lunchtime diners. Because I like to stare at other people eating. It’s a thing I do.

Rider’s Lounge doesn’t have many dessert options and they even, strangely, have a pork dish listed on one of their two dessert pages. But if you’re looking for an after lunch treat, it’s probably the best positioned place in the city with Slice and Cakes, Delizia Italiana, and Java House nearby for a decadent dessert so you won’t going without something sweet. 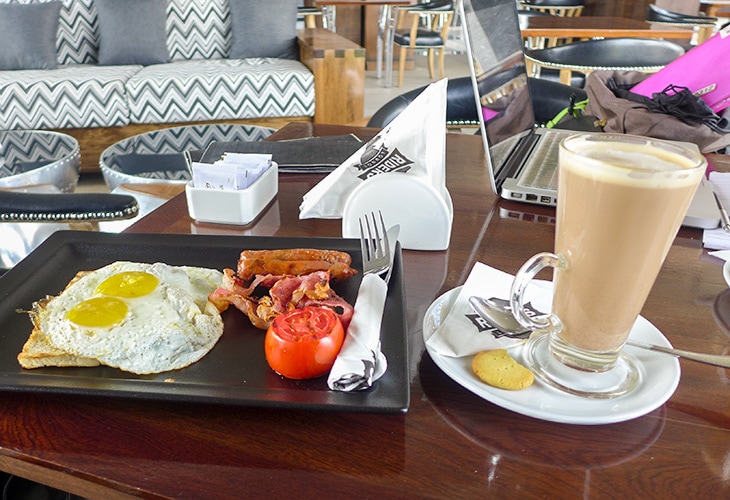 Rider’s Lounge has some decent choices for breakfast and I was pretty impressed with their medley of fried delights for Rwf 6,000 (sadly, that’s not what it’s called but I forget the name). It’s the usual – fried eggs, sausage, bacon, tomato, and toast is as expected. No weird surprises like getting hotdogs instead of sausage or the bacon being weird. They’ve also got cereal with milk or yoghurt (Rwf 2,500), a fruit bowl (Rwf 5,000), and waffles and pancakes that seem like a great deal at Rwf 1,500 but the waffles aren’t great, so don’t get too excited. They have a good selection of coffee and tea as well. 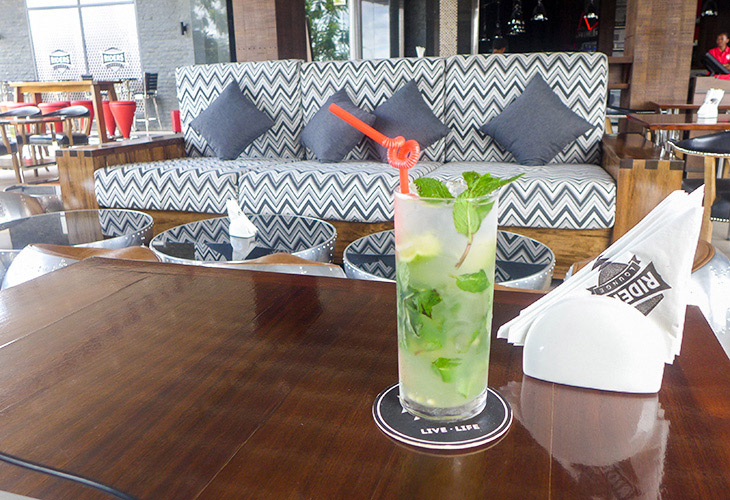 Since Rider’s Lounge is thought of more as a bar than a restaurant, it’s no surprise that their drinks menu is huge with a variety of good choices in the mix. There’s a pretty interesting section that was perhaps created by some very sexually frustrated person where you can choose from an Ultimate Orgasm, Lovely Kiss, Pink Pussy, Between the Sheets, Kiss My Lips, or Sex on the Beach or you can stick with the classes like a Dawa, Mojito (I tried it and I was impressed), Cosmopolitan, Margarita, or Long Island iced tea for between Rwf 6,500 and 7,500. Or if you’re feeling like a big night out, they have Jagerbombs for Rwf 5,000. Plus they have all sorts of choices for bottle service, they serve draft beer (500ml for Rwf 2,500), and you can find Savannah cider here though it’ll cost you at Rwf 5,000 per bottle. 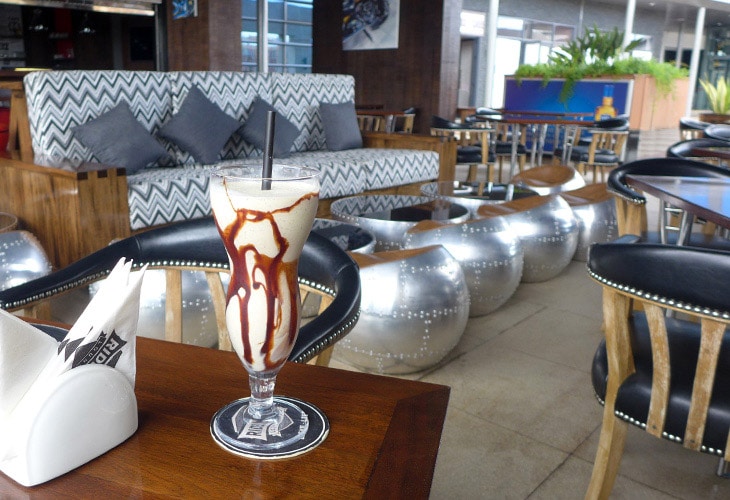 I haven’t had a chance to hang out here yet in the evenings, but it seems like it would be a nice atmosphere with a great view back over to the sparkly Convention Centre. Rider’s Lounge seems like it could also be a good place for small groups of people who want to hang out over drinks and meaty goodness, maybe at the start of a night out. They sell platters of food (goat ribs, beef brochettes, chicken drumsticks and wings, kachumbari and something mysterious called sukuma wiki) for two (Rwf 25,000), four (Rwf 45,000), or six people (Rwf 53,000).

All up, I really like Rider’s Lounge. It’s not going to be a fine dining experience but the food is decent, the service is ok, their wifi has been reliable so far, the atmosphere and view are really nice, and their cocktails are some of the best in Kigali.

Give them a try and let us all know what you think in the comments below!