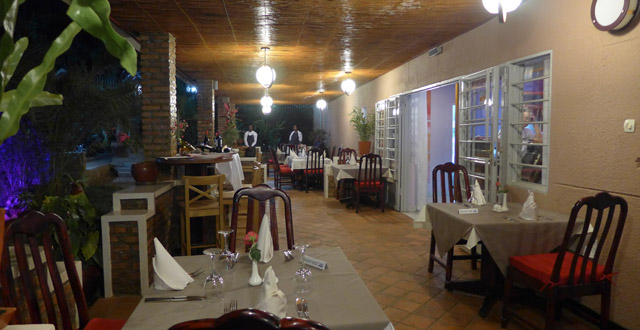 Fois gras has made it to Kigali! L’Epicurien, a new French restaurant in Kimihurura, has it on offer along with other hard-to-find goodies like duck and salmon. It’s new, it’s exciting and it has a menu free of spaghetti bolognaise and burgers… joy! Finally, something a little different for Kigali and I was excited to try it. The restaurant is the newest addition on what seems to have become Kigali’s restaurant row alongside Mosaic, Papyrus, Flamingo and the Lebanese Restaurant. It’s been getting some good reviews from people, so I was excited to give it a go last weekend.

The setting here is really nice – nicely decorated, nice indoor seating, nice bar, nice patio seating – just a nice place to be. It felt really welcoming and I don’t remember the music being too loud or offensive in any way, so that’s always a good thing. The wait staff are professional and friendly and the chef/owner was available to welcome us and answer some questions we had about the menu. It’s always nice to have a quick little greeting from the restaurant’s owner or manager, something that I’ve only really seen done at Republika. The night was off to a good start! Onto the food… 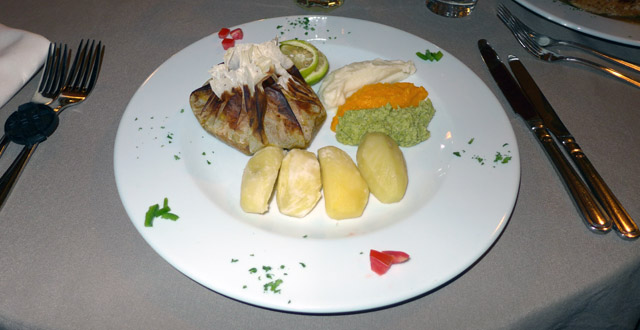 Having never seen a salmon fillet on any menu in Kigali, I had to go with that. The Norwegian salmon (Rwf 8,500) was served wrapped up in paper with the sauces inside. I’m not so into having my food served in the wrapper it was cooked in. If it was some sort of space-aged, sparkly, neon material of the future then maybe I’d be interested in seeing it but if it’s a brownish paper-like substance then I’d really rather that stay in the kitchen. The salmon was super soft and hidden in amongst a whole bunch of sauce. I wasn’t a huge fan of the sauce… I didn’t dislike it, but if I’m ordering salmon all the way out here in Kigali, I’d prefer to be able to really have it featured, rather than covered up in a sauce. The meal was tasty overall, but I guess I was hoping for something a bit different than what I got.

I’m not really sure how to describe this mojito (Rwf 5,000). I love mojitos and, normally, I’ll gulp the minty, limey deliciousness down at a slightly obscene pace. This one took me about an hour to get through. I’m not sure what the ingredients were… the drink was served with three tiny leaves of mint, no (or maybe melted) ice, and the colour and flavour seemed indicative of some sort of a mix. The drink was flat so I’m not sure if soda water was used or what. It was just weird all around. The best mojito in town still lives at Heaven Restaurant (and I’m pretty sure I’ve tried them all) and I might call this one the worst. Disappointing given that they only have two cocktails on offer. The ‘L’Epicurien’ cocktail, on the other hand, was delicious. 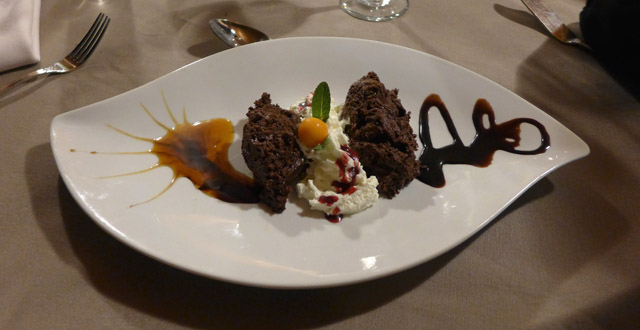 However, the saucy salmon and disappointing mojito were both immediately forgotten when the chocolate mousse made its appearance. I think several people at the table had food orgasms because of this wonderful, chocolatey goodness. It’s a perfect combo of mousse, whipped cream, chocolate sauce, some sort of a raspberry sauce I think and a caramel-ish sauce o’ mystery. It’s just so rich and so good and I foresee a lot of these in my future. I also foresee diabetes.

Dishes have a choice of sides and I opted for seasonal vegetables and boiled potatoes. If you’re expecting vegetables in their usual form then being served a plate of blended up, creamy, pastel-coloured veggie blobs might be a bit of a shock. But each of the three blobs are really flavourful and I was sold on the idea by the end of my dish. The boiled potatoes were simple but went well with the veggies and the combo of sides was nice and light meaning that I didn’t feel super full and gross after eating. I thought the serving size was just about right. 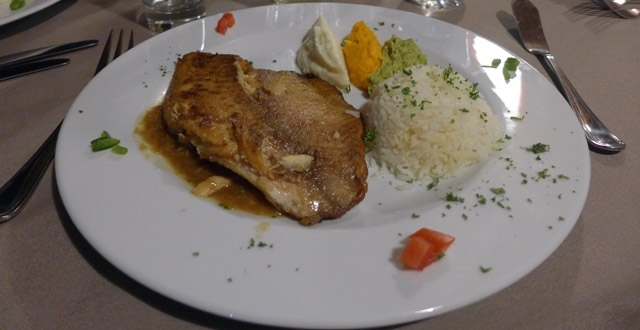 While I wasn’t so excited about my own meal, I did steal bites from my fellow diners. Ah the joys of being able to say ‘Can I have a bite? You know… for the sake of the review? For the people!!!’ It meant that I was able to scam a bite of duck in passionfruit sauce and a morsel of tilapia in a ginger sauce and I loved both.

I was expecting the prices to be a bit higher than they were. Sure, Rwf 8,500 is one of the more expensive meals you’ll get in Kigali but, when it comes down to it, paying $14 for a piece of salmon that’s been imported isn’t all that shocking. At Rwf 5,000, the cocktails are about on par with what other places charge. The wine ranges in price from Rwf 3,000 and up and it comes out of actual bottles! In Kigali, being able to buy wine by the glass that’s not coming out of a Drostdy-Hof box is rare. The red wines didn’t go down well at our table but the whites were really nice.

Overall I was impressed with L’Epicurien. I went in with some high expectations which were let down a bit by the mojito and salmon, but redeemed in a big way by the chocolate mousse and sneaky tastes of my friend’s meals. It’s a place I’ll try again, and probably often. It’s exciting to see a new restaurant in Kigali with something a little different on offer and I’m sure this place will be popular.

Check it out and let us all know what you think in the comments below!