The Radisson Blu and the Kigali Convention Centre finally opened late last year amidst much fanfare. I had been wondering if this great dome in the middle of Kigali would ever open its doors and I was very excited to take a look once the project was finished and open to the public.

While I poked around the hotel itself shortly after it opened, it took me a lot longer to finally check out Filini, the Italian restaurant at the bottom level of the Convention Centre. I’d expected it to be pretty expensive and I was waiting for a reason to splash out and that reason never seemed to come. Eventually I just decided that I was bored will all of the usual Italian restaurants in Kigali and I was going to treat myself, just because. 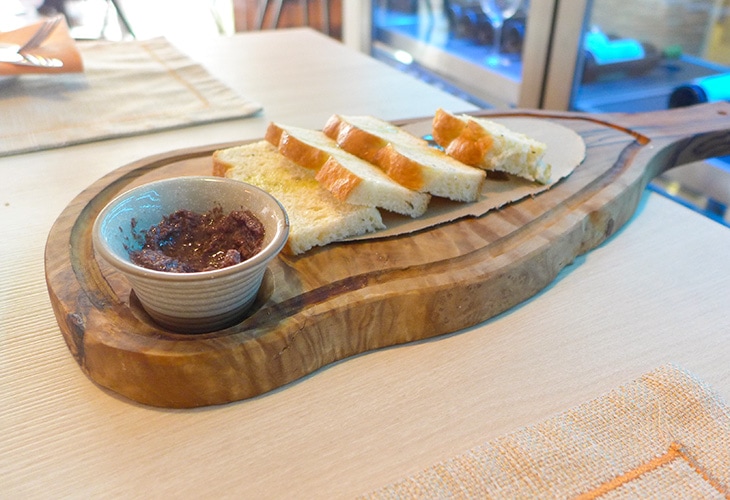 As it turns out, yes, Filini is expensive relative to other Italian restaurants in Kigali. But it wasn’t as expensive as I was expecting. Sure, it’s on the upper end of the price scale, but you can get a nice meal for a good price, especially if you start comparing it to Canada or Europe somewhere. I think I was expecting dishes to be priced well over Rwf 12,000 each, but there are some fine choices for around the Rwf 7,000 mark, including pretty large pizzas. They even throw in a tasty freebie starter of bread and tapenade which is always a nice way to give people the impression of getting better value for their money. I’d actually never had tapenade before in my life so I have nothing to compare it to, but I’m a little bit addicted to this salty spread at Filini. 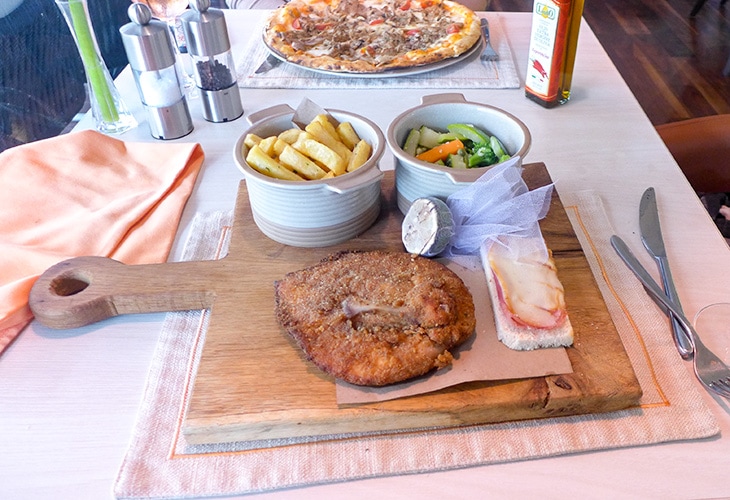 Most of the dishes, though, are between Rwf 10,000 and 15,000 including an option for a lunch grill with a chosen protein (goat brochette, jerk Chicken, steak, lamb chops, grilled prawns, fish), sauce (red wine glaze, pepper corn sauce, mushroom sauce, lemon wine butter sauce), and a side. I haven’t tried the grill for lunch yet but I recently had the ‘Corn Fed Chicken Milanese’ (Rwf 13,000) which was pretty disappointing compared with the other things I’ve had. Dry, breaded chicken, a weird toast thing, and soggy veggies. Has anyone else tried this? Is it just me? The only thing I ate in entirety was the fries. They make good fries. It was a disappointing meal overall but, luckily, they have a lot of other options that are quite good so read on! 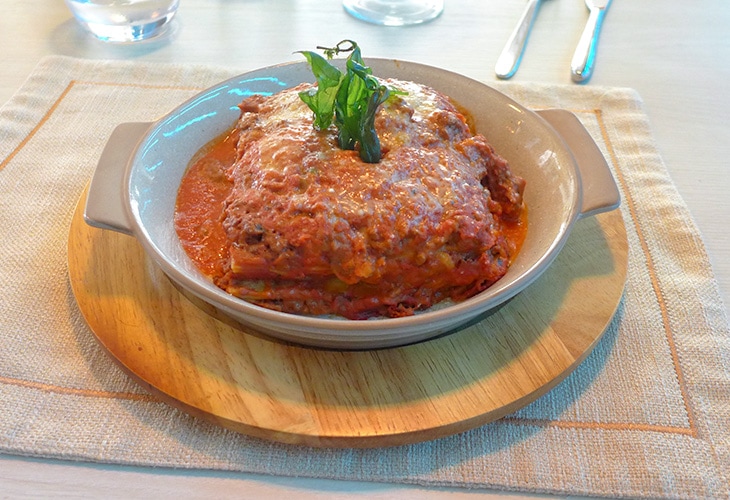 One of the stand-out dishes for me is their lasagne. I’m going to throw down and say that Filini makes the best lasagne in Kigali. I like it saucy and theirs is nicely drenched in some very good tomato sauce. At Rwf 12,000, it’s about twice the price as most other places in town that do weird things like add eggplant, which is not cool. But it’s absolutely massive and totally shareable between two people if you don’t mind the awkwardness of asking for an extra plate and cutting it in half. I have little pride when it comes to these things so I always see the sharing potential, you see. However in this case I wolfed the entire damned thing down all at once – I regret nothing! 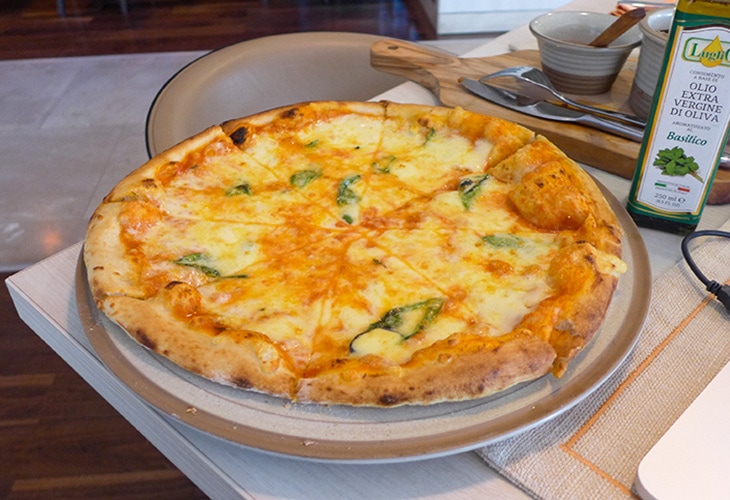 The pizza at Filini was a bit less impressive for me. It was good but not great, though I’m not sure I’ve found a truly great pizza in Kigali so perhaps I should set my expectations a bit lower. The pizza was cheesy with good mozzarella but something about it overall was a little bland. It could be that I was boring and ordered a Margarita pizza which doesn’t give much room for potentially impressive toppings so I’ll have to give the pizza another try one of these days and go for something a bit more interesting. Don’t get me wrong, the pizza here is good, it’s just not as impressive as the other dishes on their menu. I do like that they come out with a choice of four different olive oils and I love that their pepper mill could also be a deadly weapon. Seriously… ask for pepper from the mill next time. It’s glorious. 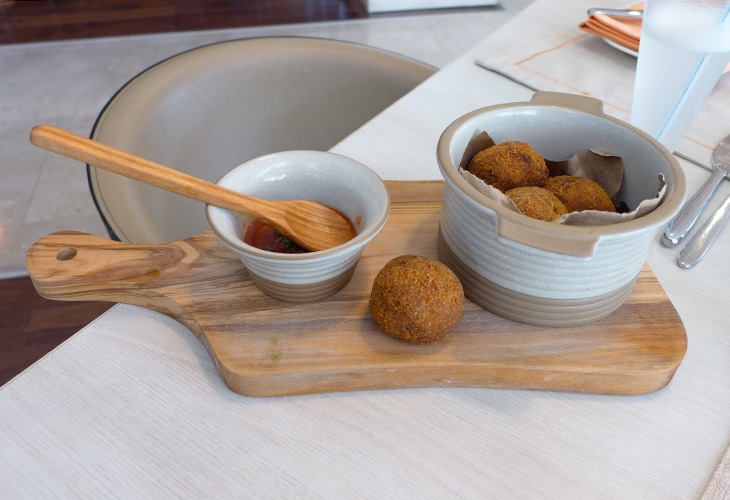 I’m kind of addicted to the arancini at Filini. A quick Google search tells me that arancini are ‘stuffed rice balls coated in bread crumbs and deep fried, usually filled with ragu, mozzarella, and sometimes peas.’ I’ve had them a few times before and they weren’t anything more than boring bread-y, rice-y balls. Sort of dry and always without the promised ragu/mozzarella centre. At least not that I could taste. So I’ve never found these things to be super exciting and I wasn’t too thrilled to be ordering them. But, oh the things I do for a review! It’s tough sometimes, you know? However in this case it was a really nice surprise. These little crispy balls were, in fact, filled with ragu and mozzarella and I was converted to the way of the arancini. The tomato dipping sauce was an added bonus. As I’ve mentioned, I love me some sauce. I think these are one of my new favourite snacks in Kigali and, for the amount of food and the quality, I think they’re very good value at Rwf 3,500.

The decor here is pretty slick and I’d compare it to a slightly fancier version of Bar Iriba at The Marriott. With huge hotel chains behind them, these two places are a cut above the average owner operated restaurant in Kigali when it comes to decor and it shows. I’m not so distracted by shiny things, but it feels good sometimes to be in a place that seems a bit more professional, even if it’s just on the surface. Of course if the food sucks then decor doesn’t count for anything but Filini gives a great first impression when you walk in and it manages to back it up with good food. 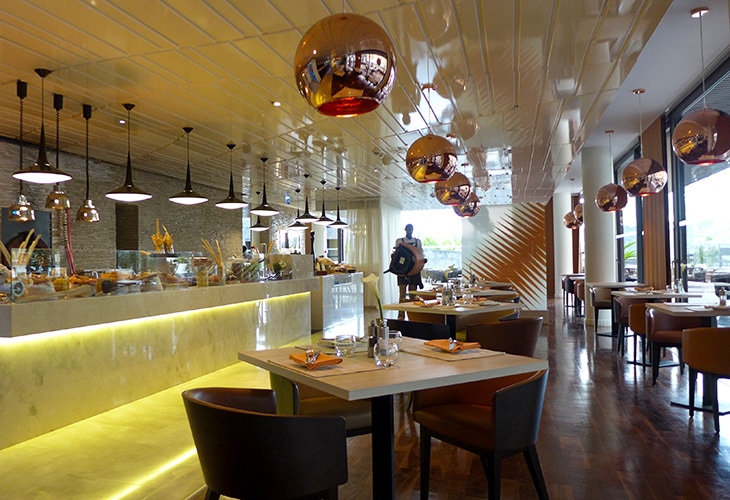 I haven’t delved too much into the world of wine at Filini. I tend not to stray too far from Drosty Hof because of that wonderful combination of being both lame and cheap. But it looks like they have a pretty serious selection of bottles on offer ranging in price from Rwf 30,000 to 120,000. Wine by the glass is Rwf 6,500, including a nice rose. I have ventured a bit into their cocktail menu and tried the espresso martini (Rwf 7,000) which was very good. Actually it might be the first espresso martini I’ve ever had so I don’t have anything to compare it to, but I wanted another one and that’s a pretty good indicator of a good cocktail.

Overall Filini at Radisson Blu is a very nice addition to restaurants in Kigali. It’s got a good selection of dishes (leaning mostly towards Italian), the setting really is beautiful, the staff are friendly, the pepper mill is amazing, and I always leave feeling happy and full. Well… maybe not after that chicken dish, but the wine, fries, and company were good so I can’t complain too much!