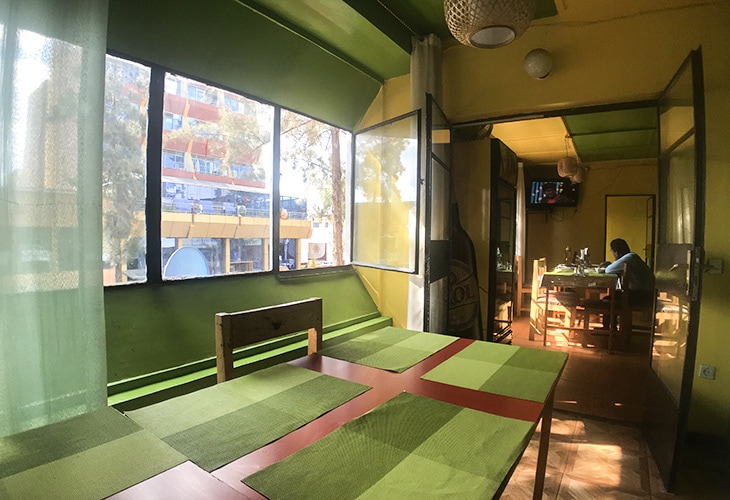 Dine Divine is one of those places that would be easy to glance at and pass right by. I actually did that when I almost removed them from my 3rd edition Kigali map because the area was was too congested. I saw it and marked it down on my map as a restaurant, but I thought it was just another typical Rwandan buffet place so I walked on by without giving it a second look. It’s perched up on the second floor in the busy downtown area above a restaurant called Ma Colline and the only evidence that it exists is a small sign and a stairwell, so it’s not the most obvious place.

Luckily, before I sent my final map file to the printer I spent a good amount of time harassing people for their favourite spots in Kigali to see if I’d missed anything. One friend had a few hidden gems to report including Dine Divine and it’s become one of my favourite spots for a cheap but delicious meal. It pays to ask for help!

Dine Divine is quite similar to Preet (which is located down the road) in that it’s an affordable, low key, Indian place focusing on South Indian food. Unlike Preet though, Dine Divine serves meat and they’ve got a selection of beer in the fridge. The atmosphere is similar with a small, simple space, wait staff who hustle to serve you, and ever-present owners ready to handle any questions or issues. It’s nothing fancy but the food and service are impressive. 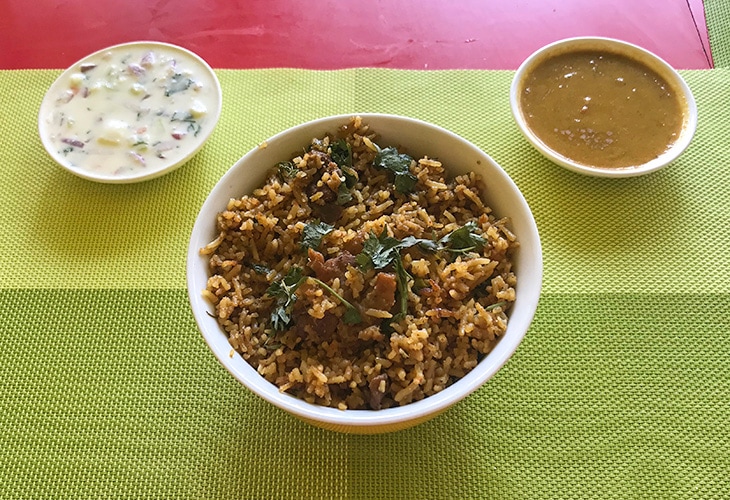 I really don’t know much about the differences in Indian food between the country’s regions. I basically know that I love anything with paneer, I’m a big fan of saucy curries with naan bread, and everything I order must be covered in raita. One of the few bits of information on South Indian food that I’ve managed to glean over the years, though, is that they’re responsible for the mighty dosa. I’m not so sure I know much about dosa because they seem to have come to me in many different forms, but you’ll find a huge selection on the Dine Divine menu and what’s served is massive and delicious. Because of my love of paneer I, of course, had to try the paneer dosa (Rwf 2,000). It’s is perfectly crispy triangle of wonder with a selection of tasty sauces and I think I’m in love. 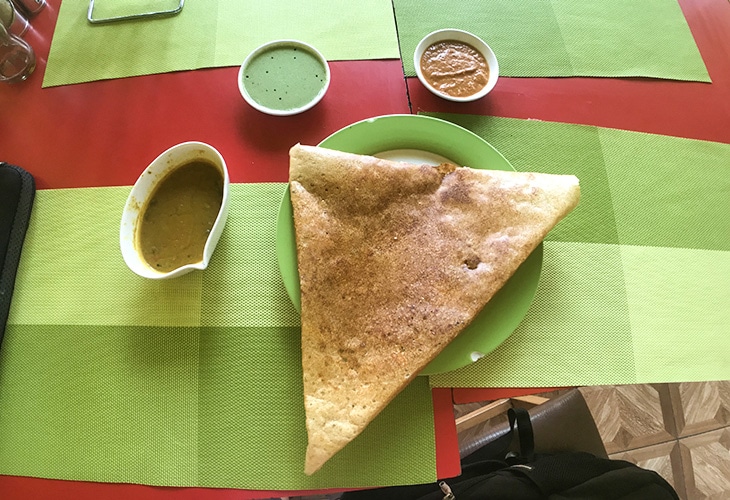 Thinking dosa was a small starter, I ordered mutton biryani (Rwf 3,500) as my main. They also have chicken biryani but they’re served on alternating days with chicken on Monday, Wednesday, and Friday and mutton on every other day. I’ve never really ordered biryani before but I suppose I was feeling adventurous and I love mutton, so I went for it. I think I’m more of a lover of sauce, but this was really delicious and I think if you like biryani then this would make you happy. It’s gigantic and could probably be shared between two people, especially if you get a starter as well. 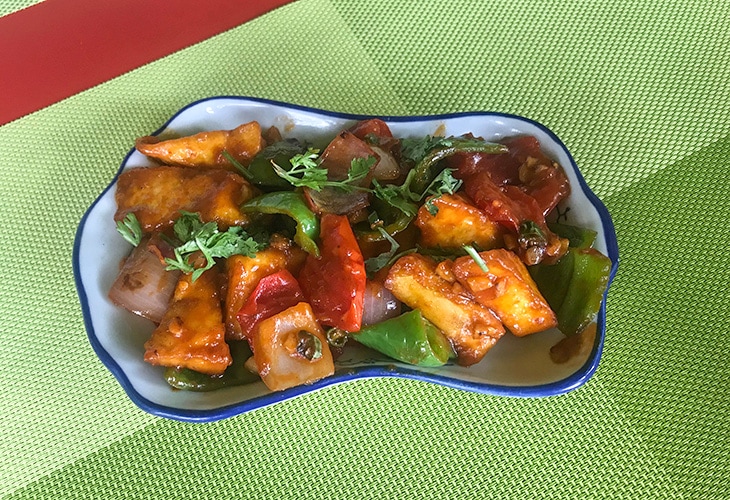 They like their spice here and I found that chili sort of floated around the place at times bringing on random coughing fits. I was warned that certain dishes were quite spicy but it was a perfect level for me – as long as I searched for and removed the chilies. The chili paneer (Rwf 2,500) was one of these dishes with hiding chilis, but it’s been added to the ranks as one of my favourite meals in Kigali. It’s spicy, so raita is essential but it makes a perfect dipping sauce and I basically just ate this without any naan or rice.

Speaking of naan… the one area than Dine Divine disappoints is their bread. Everything I’ve had so far has been excellent, except I’m not a massive fan of their chapati. It’s a fine chapati, don’t get me wrong. I’m just not so into chapati in general. Basically, when I’m at an Indian restaurant, I want naan bread and anything less is a bit of a disappointment. Chapati just doesn’t absorb the curry sauce in quite the same way, and that makes me a bit sad. Perhaps chapati is more of a South Indian thing than naan? I don’t know and I’m too lazy to look it up but, let it be known… this is a chapati sort of place. You’ll find no naan here!

My friend who is wise in the ways of food told me on multiple occasions that I should try the kulfi on my next trip to Dine Divine – so I did! I’m not one to ignore a food recommendation, especially when it involves an ice cream-related dessert. Kulfi is sort of a super rich ice cream that, unless my taste buds betray me, seems to be made from condensed milk. It’s flavoured with cardamom and I think there are bits of pistachio in there as well which, together, make a rather amazing dessert. It’s quite sweet so, possibly for our own good, the serving is pretty small. It’s Rwf 1,000 for a piece (scoop?) but I’m definitely going in for two next time. 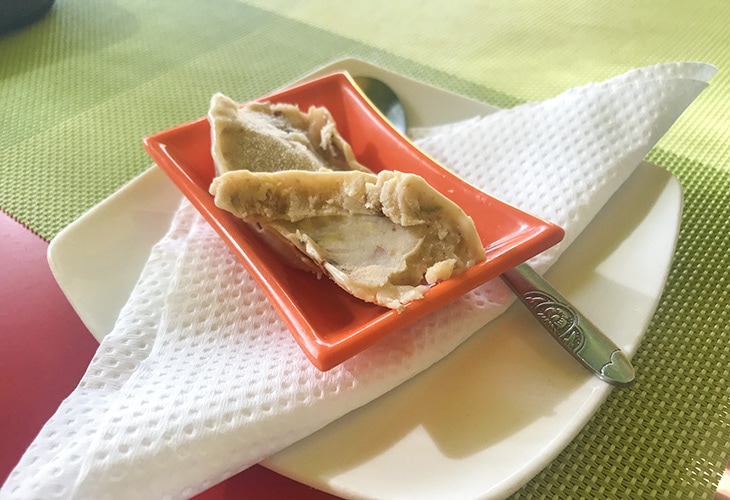 For such a small, simple place, Dine Divine has an impressive menu. They offer a different lunch special each day of the week that costs between Rwf 2,000 and 2,500. They also have vegetarian or meat thali at lunch, and on Sundays I’m told these are served on a banana leaf. They’ve got a good selection of starters and even a small menu of evening snacks served after 6:30pm. You can get a cup of tea here for Rwf 300, coffee for Rwf 500, and a bottle of water is Rwf 300 which is almost unheard of in a restaurant.

Dine Divine is sort of a weirdly loud place where the TV is always at high volume (playing either cricket and some sort of Bollywood variety show on my two trips so far) and the owners constantly seem to be having some sort of a shouty conversation with their staff on a variety of topics. But somehow it’s more charming than annoying. The service is very good and the food comes out reasonably quickly, but sometimes at different times. They’re happy to take pre-orders over the phone if you’re in a hurry, so if want your food ready for a certain time give them a call.

As you can probably tell, I’m a fan of this place It’s conveniently located close to WAKA Global where I’ve been working from these days and I can see myself wandering down there a lot for lunch in the coming weeks!