Cocobean is a relatively new restaurant in Kacyiru that also doubles as a nightclub and soon(ish?), a place to come to swim. Oh Cocobean, is there anything you can’t do? As it turns out… service isn’t exactly where it shines, but I was impressed with pretty much everything else about this place. Cocobean is set on a terrace under a beautiful wood and grass roof with one of the city’s nicest views to gaze at. It’s nicely decked out with colourful and comfy (albeit super heavy) chairs and sturdy tables and it overlooks the valley between Kacyiru and Kimihurura. Anyone familiar with Inzora Rooftop Cafe will know (and love) this great view as it’s located right next door.

Disappointingly, each of the three times I’ve gone, Cocobean haven’t had many of their soups, salads, or starters. So if this is still the case, you’re pretty much forced into having one of their main dishes. Most of the main meals on offer are quite heavy for lunch with grilled meat and stews on offer along with veggies and potatoes as sides. So make sure to either go hungry or to cross your fingers that they’ll have gotten themselves together enough to actually have what’s on their menu. 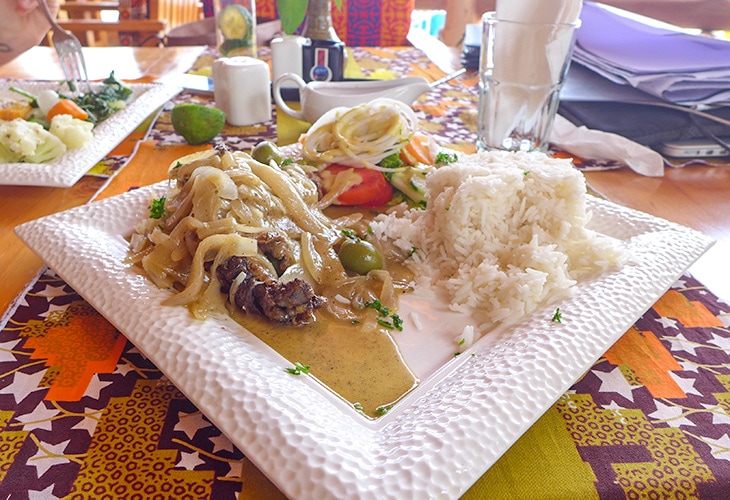 One thing that sets Cocobean apart from other restaurants in Kigali is their selection of West African dishes like Chicken Yassa (a popular dish from Senegal) and Jollof rice (Rwf 6,000), among others. I’ve never had Chicken Yassa before so can’t compare it to the ‘real deal’, but I enjoyed the Cocobean version. Tender chicken covered in an onion-y gravy of sorts.

On another trip to Cocobean I ordered the goat Mafe, not really knowing at all what it even is. I was told it was goat in peanut sauce which sounded good to me so I gave it a try. I like that about Cocobean… there are quite a few presumably West African dishes that I’ve never heard of so it’s fun to try to new things. The goat Mafe (Rwf 6,000) was a great choice with super tender goat cooked on the bone and served in a thick gravy with a nice and subtle peanut taste. 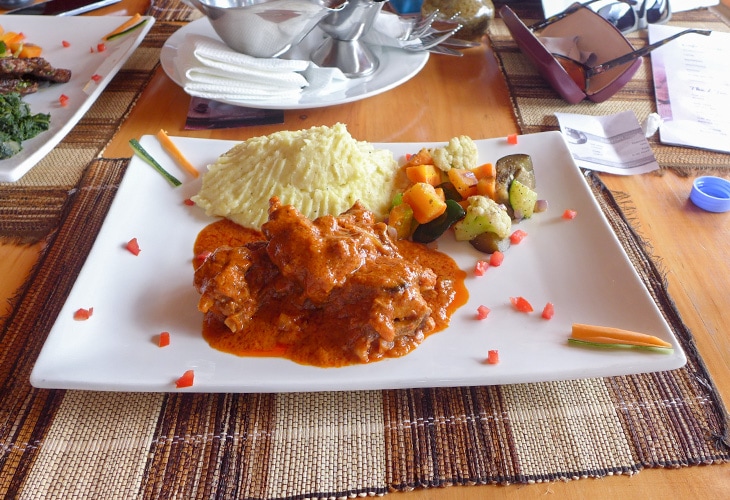 A friend ordered the Moroccan chicken with couscous (Rwf 7,500) and he was really impressed with the flavours. The lamb (Rwf 7,000) that my other friend ordered, however, was cooked into oblivion and very dry. I tried the lamb too and, while it was pretty dry, it was also packed with flavour. So far I think the food here has been good and it’s nice to have a menu filled with things that I’ve never seen on offer at other spots around town.

One thing that has let me down a couple of times at Cocobean has been the service. The first time I ordered lunch here, I went with a friend. I ordered the Chicken Yassa (Rwf 8,000) and she opted for two starters, one of which they couldn’t make because, weirdly, they had run out of bread. But the issue was that when she changed her order to a fish dish, the waiter somehow managed to forget my order completely. Alarm bells should have been ringing when he brought out her dish, two sets of cutlery, and then asked if we were sharing. Given that we were the only table in the place, I’m a bit mystified about how the waiter became confused but after clarifying my order, it came out about 15 minutes later and all was well. 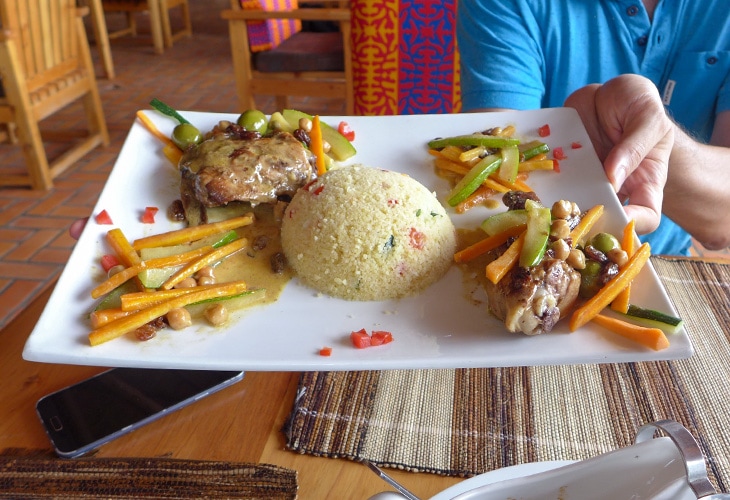 The second issue was less annoying but this is possibly because we were being more vigilant about whether the order was taken correctly which meant that we avoided a total cock up. Our waitress took three orders, each with side dishes (rolling her eyes and making faces of disapproval with each order which was super strange) but didn’t write anything down. When I asked her to repeat the order, she disappeared for 5 minutes and came back with a notepad, taking our order again. Stuff like this is annoying to me… just use a notepad from the start! I’m not there to be impressed with the memory skills of the staff. Call me crazy, but I’m far more impressed with actually getting what I order. 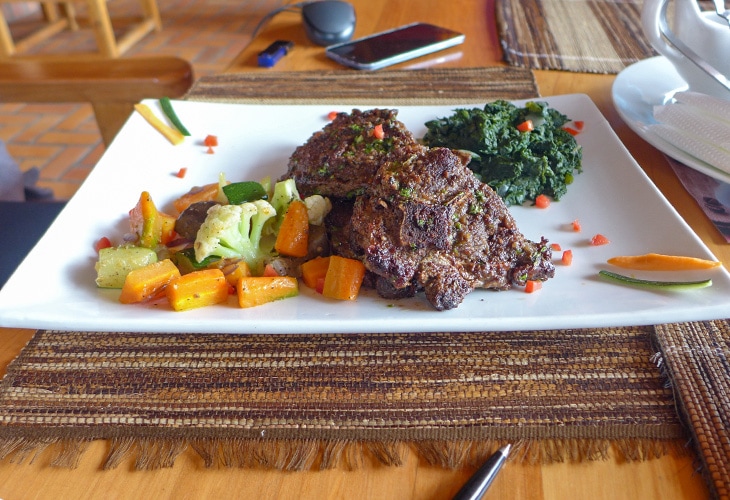 So if you order something more complicated than a smoothie, do your best to make sure they’ve taken your order correctly because so far what I’ve experienced hasn’t given me much confidence. Another strange thing here is that when you ask about certain dishes, rather than just taking your order, they’ll tell you that it’ll take a long time which, I think, is code for ‘we don’t have that’. Each time I’ve been, something I wanted wasn’t available… including every single salad. I’d really like to see them have a menu filled with dishes they can actually provide, rather than pretending to have things that I have yet to see there. 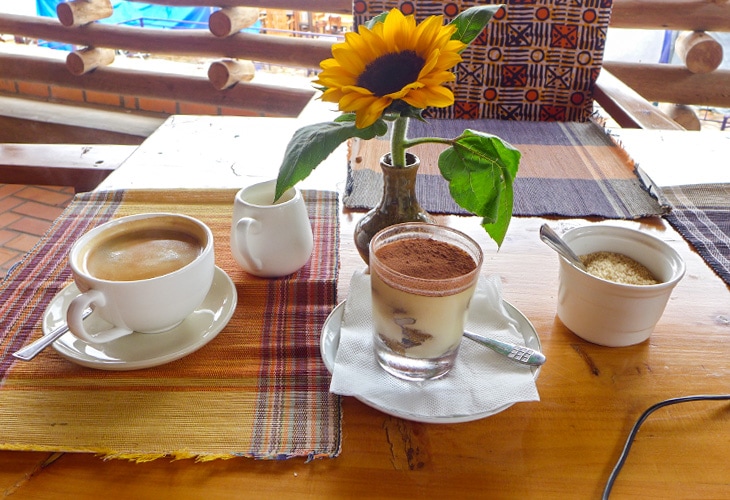 Despite the downsides related to service, I think Cocobean is a really great choice for coffee, dessert, smoothies, and cocktails (Rwf 5,000 to 12,000). Their dessert selection isn’t huge but I really loved their tiramisu (Rwf 5,000) and would come back anytime for that and a cappuccino (Rwf 2,000) to take in the view and relax in their comfy chairs. Their smoothies (Rwf 2,500 to 3,000) and fresh juices are very good and they have a pretty large selection.

They also really go all out on the cocktail (and mocktail) sections of their menu and offer up a whole bunch of interesting choices in case you’re in need of a boozy lunch. Or beer starts at Rwf 1,000 for a small Primus, wine by the glass is reasonably priced at Rwf 3,000, and the cheapest spirits are Rwf 2,000 per shot and go up from there (and bottle service is available). They’re pretty well-stocked for alcohol which makes it a good place to come in the evening as a warmup before heading to the attached nightclub which seems to have become a popular spot.

So far I’ve only ever eaten up on the top deck but there’s also an area below that they seem to be turning into extra dining space. The bottom area has a swimming pool with a bunch of shaded tables around the side and what looks like a stage. They seem to be going for the same sort of vibe as Pili Pili and The Hut with an option for spending the day at their pool eating and drinking. On my first trip I’d asked the waiter for the price of the pool and he said it wasn’t there for public use (the restaurant is attached to the owner’s house, so I can only assume it was meant for their personal use only). On a more recent trip I asked again and he said it would be open for to public but the prices weren’t set yet. So I have no idea what’s happening down there but I’ll report back as soon as I do!

I really like Cocobean and I hope they can iron out their inconsistent service and adjust their menu so that it actually reflects the things that they’re able to serve. This place has a lot going for it and it’s a shame that there’s always some small thing that makes me leave the place feeling frustrated. But they are very new and hopefully their wait staff will improve with some time and experience and, at the very least, they’re super sweet. If you’re vigilant about making sure your order is correct before it leaves for the kitchen, you should be fine.

Oh and as an added bonus, their wifi is quite reliable and fairly quick and Cocobean has become one of my favourite places to work.

Give them a try and let me know what you think! And even better, if you actually know anything about West African cuisine (unlike me), I’m sure we’d all love to hear your thoughts on their dishes.