4 Blooms is a great little place that’s been around for about a bit over year and I absolutely love what they’ve done with the shipping container concept! Not only have they turned it into a stationary food truck of sorts (similar to their sister business, Chapati), they’ve also managed to construct a really nice and welcoming seating area along with plenty picnic tables off to the side. Who knew that dining next to a petrol station would be something that totally works?

The menu here is small but everything they do makes total sense. No brochettes in sight. I like that they have just a few food choices so you’ll know that they’re experts at everything they serve. But it does mean that if you’re not in the mood for a burger or hotdog and fries then you’ll probably want to find somewhere else to eat.

If you only want a burger it costs Rwf 3,500 so it makes sense to upgrade to a ‘meal’ where you get fries and a drink thrown in for only Rwf 500 extra. In fact, if you want a burger and a drink only you’ll actually end up paying Rwf 4,200 so I guess the fries are sort of a no-brainer. I do wish the menu were a bit more versatile for those of us who don’t feel like fries. Sometimes you just want two burgers, you know? 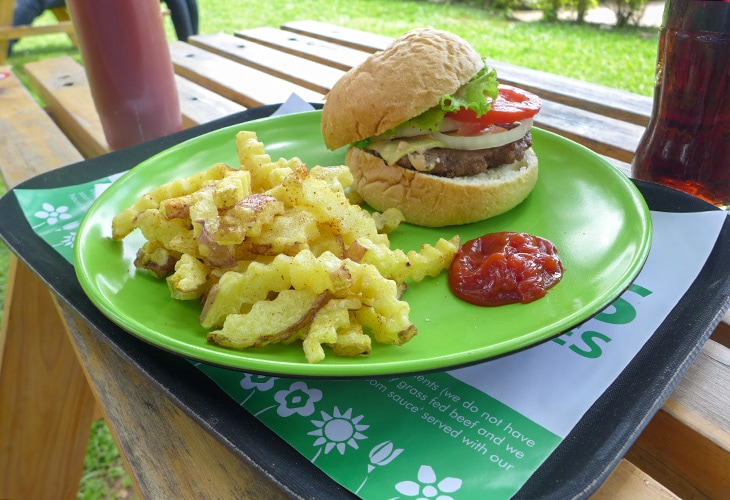 Luckily they’re good fries. I did feel they were a bit soggy the first few times I visited (which, to be fair, was shortly after they opened and it looks like they’ve spent time tweaking their cooking method) and I’m happy to see that they’ve crisped them up. They’re crinkly, they have the skin on the outsides, and there’s a nice spice added to them.

The hotdogs are good too. I love me some hotdogs but I have admit to snobbery on the matter and say I’m a bit scared of trying them outside of the safety of North America. I have learned the hard way that hotdogs abroad can be a bit hit-and-miss and I, therefore, live in fear of them. But! Because I’m such a dedicated little reviewer, I decided to give the 4 Blooms hotdog a try and I have to say that I was impressed. 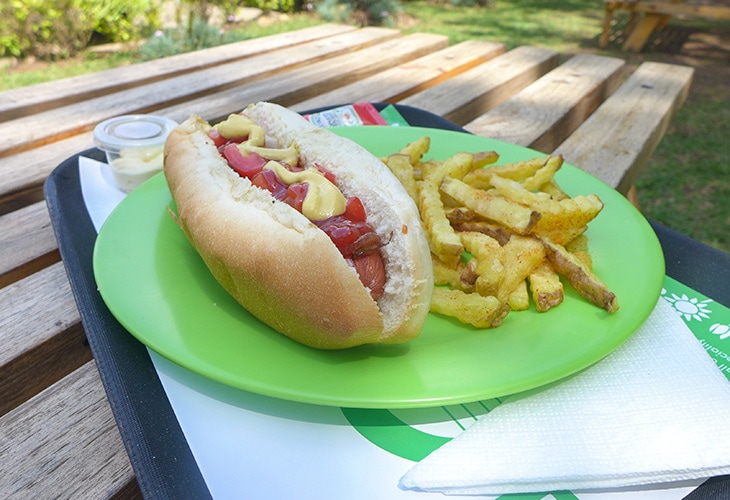 The hotdog bun is what you’d expect… one of those soft breads that really only works with hotdogs. I’d say the bun was very slightly too large for the actual dog but now I’m just being picky and this could just be a personal preference. I’m sure each one of us has their own perfect wiener-to-buns ratio, and I don’t claim to speak for the masses.

I really like 4 Blooms but I would like to lobby for plain ol’ boring yellow mustard in place of Dijon. I don’t love Dijon and I really, really, REALLY love that bright yellow stuff and I consider it an integral part of any burger or hotdog. I’m not hating on Dijon or advocating its dismissal but only asking that we, the people, have free mustard choice! They do have Sabana hot sauce and offer up ketchup and mayo though so I do feel that they’ve got sauces pretty well-covered, even if us non-Dijon mustard-lovers are left slightly disappointed. 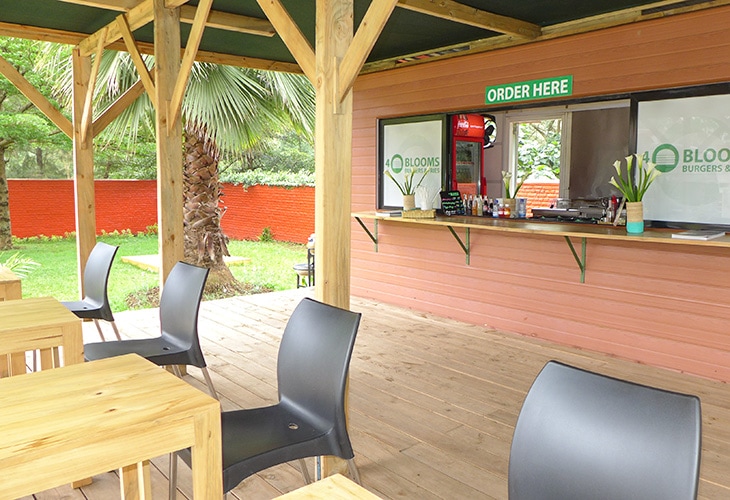 It looks like 4 Blooms has blossomed (see what I did there?) into a popular lunch spot. It makes sense, especially on nice days because all of the seating is outside. My food was out within 15 minutes which isn’t exactly fast food, but it’s even better because I know it’s cooked fresh to order. The servers are super nice and friendly and it’s the sort of place where your meal just goes to plan every time. No food-related dramas and I appreciate that.

4 Blooms is an innovative, unique little place and I’m happy to see it was busy when I was there. It’s such a cool idea to use shipping containers in this way. This is a great little spot and I’d recommend you give them a try soon!