One of the things I really love about living in Kigali is that chain restaurants and fast food places haven’t (yet?) invaded. It’s really nice to live in a place that’s free of the McDonald’s and KFCs of the world – where small, privately-owned businesses are the norm. That said, there are a few chain restaurants that do exist here, but they’re limited to some imports from Kenya and Uganda and they mostly live at Kigali Heights. Java House and 360 Degrees Pizza are Kenya’s submissions (and Riders Lounge is from Uganda) and I have to say that, despite my overall aversion to chains, I’m quite happy they’re here.

Java House is probably already familiar to most people who have spent any time travelling through Nairobi airport. They’ve been in Kigali now for awhile, and they’ve even expanded to another location in Remera. Their sister restaurant, 360 Degrees Pizza, is much smaller a brand and it’s a lot newer in Kigali so it’s probably not as well known. I visited when I was in Kenya working on my Nairobi map and I kept returning to park up with my laptop to do some work while enjoying reliably good food and service in a cozy setting. 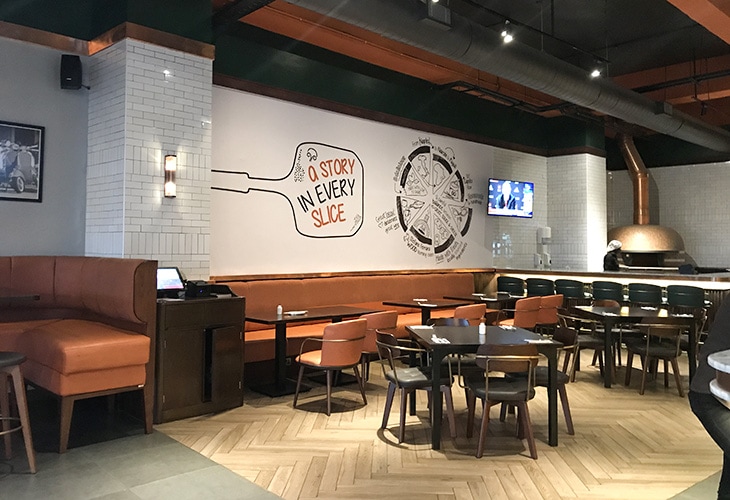 Their Kigali franchise has lived up to the high standard I came to expect from their Nairobi branch. They’ve got the same slick decor and polished menu, plus the service is quite good and the food comes out relatively quickly. The thing that impresses me most is how huge their selection of pizza toppings is and that they always have everything in stock. I’ve never ordered something here to be told that they’ve run out and, with all of the weird and wonderful offerings they have, that’s quite impressive.

Their pizza menu is divided into ‘Classic Pizzas’ and ‘Signature Pizzas’ which range in price from Rwf 9,000 for a Margherita up to Rwf 13,000 for a couple of more fancy options. Pizzas are large enough to feed two people if they’re aren’t super hungry, or of you add a starter or a side salad into the mix it would be perfect for lunch for two. Though 360 Degrees Pizza is quite expensive, sharing can mean that you can cobble together a good value meal. They also have an ‘Express Business Lunch’ (Rwf 9,000) with a choice between either a Fococcia sandwich or a personal-sized pizza plus a garden salad, fries, or soup. 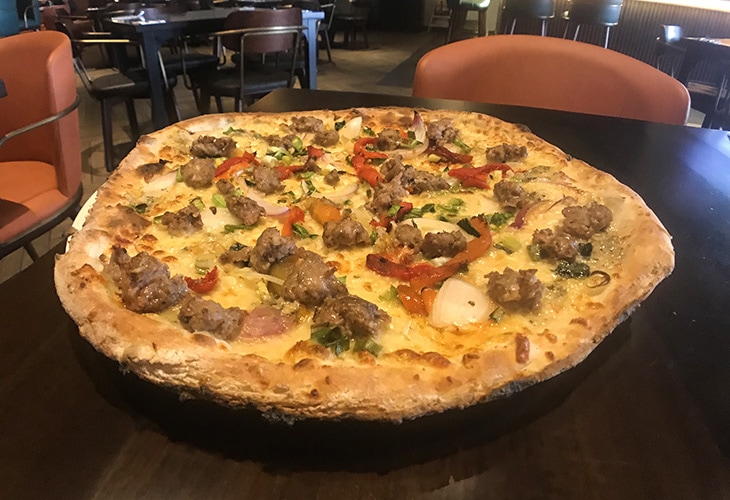 Because 360 Degrees Pizza is a chain, I’m loath to admit that they make my favourite pizza in Kigali. Sol e Luna, Lavana, and Mr. Chips all come close, but there’s just something special about the crust and selection of super fresh toppings here that sets them a bit above the rest. I’m partial to the D.O.P. Margherita (Rwf 13,000) even though I have no idea what the ‘D.O.P.’ stands for and it’s essentially a simple Margherita pizza but with fancier Bufala mozzarella cheese.

If you’re looking for something a bit meaty then The Federation (Rwf 10,800) is amazing with pork sausage, blue cheese, scallions, mozzarella, and red onions. Some other interesting ingredients include truffle oil, poached figs, fennel, dill, coconut chicken, and mint. Not all on one pizza, thankfully, but it does give you an idea of the thought put into creating different pizzas and the fun they must have sourcing all of these ingredients! The service here is very good and the wait staff have no problems substituting pizza ingredients if you really want Brie instead of goat cheese, or if you have some other adjustment in mind. You can also pay extra to add toppings from a list on the menu. 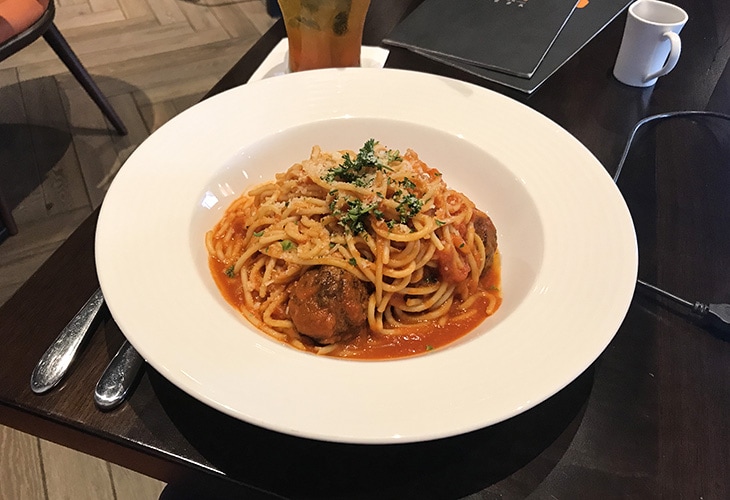 This place isn’t all about pizza and they have a really great selection of pasta dishes to choose from, as well. If I’m in the need for some comfort food then my Kigali go to is probably 360 Degrees Pizza’s spaghetti and meatballs (Rwf 10,500). There’s something cozy-feeling about it that I love. Their meatballs are delicious and if I’m not feeling like a huge helping of spaghetti, the meatballs marinara (Rwf 4,800) are a great option, too. I’m sort of addicted to them. You can also choose fro nine other pasta dishes including butternut squash ravioli (Rwf 9,500), mushroom and pesto gnocchi (Rwf 9,500), bacon Gorgonzola penne (Rwf 10,500), and more. I feel like everything on their menu sounds delicious and it’s always hard to choose. 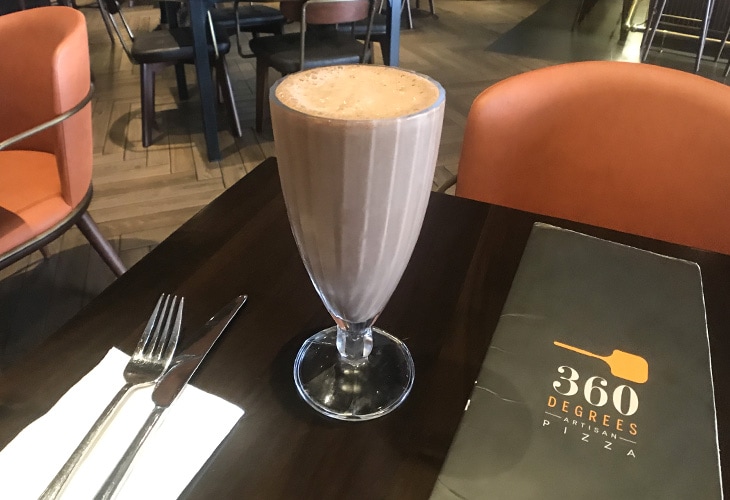 It seems like 360 Degrees Pizza is in step with Java House in the drinks department and their juice and milkshakes menu is identical. This is glorious news since Java House milkshakes are some of the best I’ve had. Anywhere. Ever. I think I also have a milkshake addiction and their double mocha and salted caramel shakes are seriously amazing. They’re crazy expensive at Rwf 5,200 each (and I have a sneaking suspicion that the cups at 360 Degrees Pizza are smaller than the ones at Java House) but the really are incredible and perfect for a guilty treat from time to time. 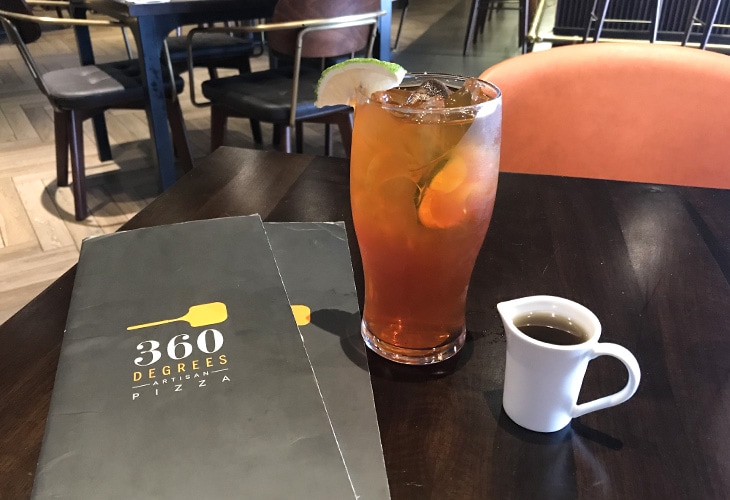 The atmosphere here is what you’d expect from a chain restaurant in a shopping centre. It’s not massively original, but it is very professional. Plus the fact that it seems standardized gives you hope that your experience will be the same as a 360 Degrees Pizza in Nairobi. The outdoor seating area is nice with a view of the Convention Centre and the high tables and chairs are unusually comfortable. As a short person, I’m anti-high-chairs but I don’t hate these. The pizza oven inside in the corner is a nice touch. As with Java House, 360 Degrees Pizza is quite pricey, but the serving sizes are usually massive which balances it out a bit.

If you’re looking for that personal touch where the owner comes over to say hello and the menu changes on a regular basis, this is not your place. But if you’re in search of consistently good food and service without surprises or hassles, 360 Degrees Pizza is a fine choice.