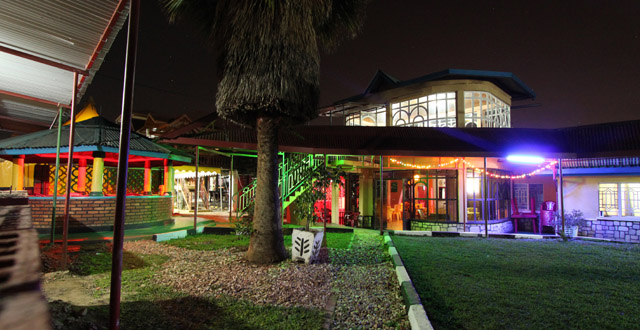 One of my first social stops in Kigali way back in the summer of 2010 was La Capri in Nyamirambo. I’d been invited by a friend who was a friend of a friend (or something like that) who was having a leaving dinner at there. Wait. Actually… they were having a leaving dinner at Green Corner and it was to be a feast of giant fish – except they didn’t have any fish. So, as the girl who was leaving had her heart set on fish, we commandeered a matatu and were driven to La Capri. Though the food took over an hour (something I wasn’t yet used to), it was an amazing meal and my first introduction to grilled fish and brochettes in Rwanda. Ah… the memories.

But since I was new to the city I, of course, had absolutely no idea where I was at the time. After several trips to Green Corner I eventually learned where it’s located, but La Capri remained elusive and lived only in my faint memories. So sad. Oh, La Capri… when, oh when, would we meet again? 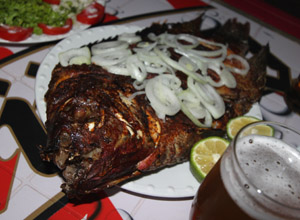 Well. The answer to that question is last Wednesday night. Having spent another 2.5 years in this city with occasional trips into deepest, darkest Nyamirambo, I’d finally figured out where this mysterious restaurant of yesteryear was located. When a friend of mine suggested dinner in Nyamirambo, I suggested La Capri, anxious for a second visit to indulge in grilled fishy goodness.

The place was pretty much as I remembered it and, despite pre-ordering at 7pm for our food an hour later, our dinner still didn’t come out for another hour and a bit after that. I guess the only difference is that this time I was expecting it so just enjoyed my beer without to much wondering about where our food could be.

The grilled fish (Rwf 8,000) was pretty much what I’ve come to expect from fish places all over the city – a huge, crispy-skinned fish served with some lime and onions. The fish was really good but I felt like it was a little more skin and less fleshy goodness. If you’re more into the crispy skin part then you’d be happy… but I prefer the fish underneath and it didn’t seem to be as meaty as fish in other places I’ve been to. 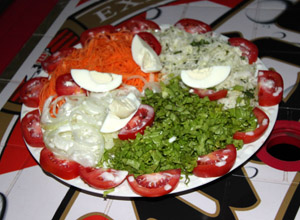 For the sake of the review (I have a tough job…) we also ordered a couple of brochettes. The fish brochette (Rwf 1,000) was delicious and had a really nice taste to it. The beef brochette (Rwf 700) was really good too. I actually enjoyed those more than the fish. The salad of lettuce, carrots, onions, something mysterious, tomatoes and eggs was very impressively presented and tasty but the lack of cutlery made it a bit of an adventure. Ripping the flesh from a giant grilled fish with your bare hands is fun and satisfying… scooping lettuce into your mouth with your hands – less so.

Sure, the food took ages even after pre-ordering, but the service was still pretty good. Beer orders were taken without too much waiting around (and they were cold!) and our waiter was nice and friendly. One of the more unusual aspects of La Capri – being that is it a local bar in Nyamirambo – is the toilets. They’re not gross! It’s a rare thing to behold in this part of town but not only are they clean, but they even have toilet paper!

La Capri is a big place with a lot of seating, both indoor and out. It’s got an elevated area if you’re looking to eat while lording over the people in the courtyard and the garden area is pretty nice. I forget what music was playing exactly, but I seem to remember it being a strange choice which is always something I appreciate.

For quality of the fish, I’m going to stick with Green Corner as my favourite place. But for atmosphere and a nice place to hang out… La Capri is a great choice for some food and beers in Nyamirambo.