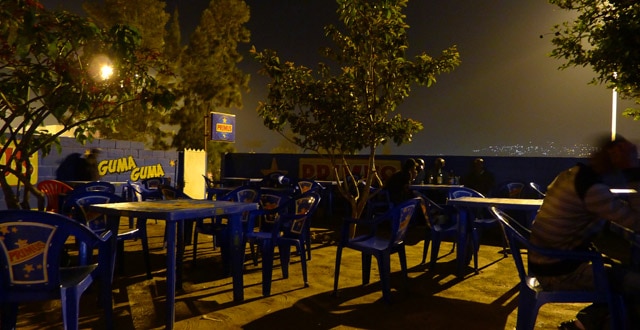 Living close to Nyamirambo, I rarely venture out to the other side of town to Remera area for much, let alone for a meal at a local bar. Nyamirambo has plenty of good spots offering up whole fish or chickens for cheap so if I’m craving slow service, cheap beer and delicious food I’ll head in that direction. But one thing this Muslim part of town lacks is pork and that’s where the Remera side of town comes in handy.

I drag friends into deepest, darkest Nyamirambo a lot for fish meals and often hear ‘wow, that was great… but you have to try this place I know!’ I’d heard plenty about ‘aka benz’ from a couple friends and finally made it out for a meal with them tonight. I’d actually thought Aka Benz was the name of a restaurant somewhere in Remera but apparently (after some very half-assed internet research) I’ve come to discover that it refers to a pork dish. Apparently a pig’s nose looks like the Mercedes Benz symbol or something about Germans… or maybe the internet is lying to me. Who knows. 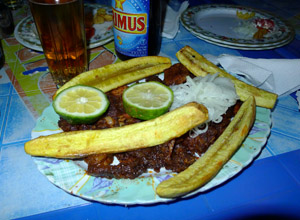 So! I finally made it out for an aka benz meal at Come Again Bar which is located on the road heading out to the airport. It was a long way to go but seriously worth the freezing cold journey. For Rwf 5,000 I stuffed myself with 1kg of tender, yummy pork (actually I only ate about half and then got a takeaway box for the rest), chips, bananas, mayo, mysteriously delicious onions, a skimpy salad, and a big Primus. Considering I have plenty for lunch tomorrow, it’s a pretty good deal. The chips are crinkle cut too! But they came out a bit cold.

The food took about as long as I would have expected – the standard hour long local bar food wait. Apparently it doesn’t usually take so long and my friends were getting a bit anxious. Things got worse when only one out of the four aka benz meals we ordered was delivered as three other plates were delivered to another table. About 10 minutes later the other three meals made it to us. The brochette I ordered never materialised.

The bar is actually really big with a lot of seating in the back as well as a nicer area up front. I went on a Tuesday and the place was packed, leaving us needing to hoard plastic chairs for our arriving friends. The view is pretty nice and I was impressed with the setting. So many local bars are hidden behind concrete walls and I’m always surprised at how nice they can be. It’s still all plastic chairs and tables but the trees were a nice touch and the atmosphere was chilled out and fun.

The toilets aren’t somewhere I’d want to hang around but I’ve seen worse. There was toilet paper!