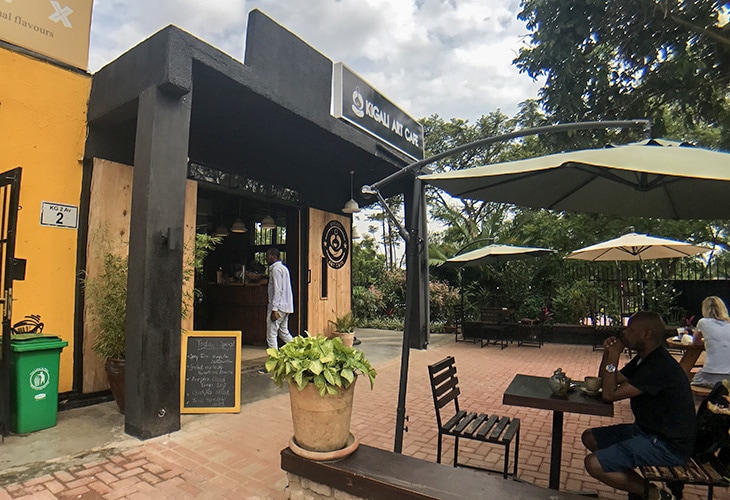 I’ve been out of Kigali for about eight months which is way WAY too long for my soul to stay happy. But I’m back now, even if just for a bit, and I’m hitting the streets to see what’s new. One of the first places on my radar to visit was Kigali Art Cafe, located right next to NowNow Rolex at the top of Kimihurura. I’d seen it a bit about them on social media and I was super intrigued so I made it my first review.

The cafe seems really popular with several tables inside and outside already occupied at 9am. They’ve got a really cool inside area with huge windows and great light and the tables along the one wall are perfect for parking up for awhile with a laptop. I love the brick walls, climbing plants, and large windows – they really have managed to create a very inviting cafe with a relaxed vibe. They have the same amount of space outside, with some tables under umbrellas and some out in the sun which gives sun-lovers an option to catch some rays. Even the music is a nice touch as well with instrumental tunes playing in the background at an unoffensive volume. 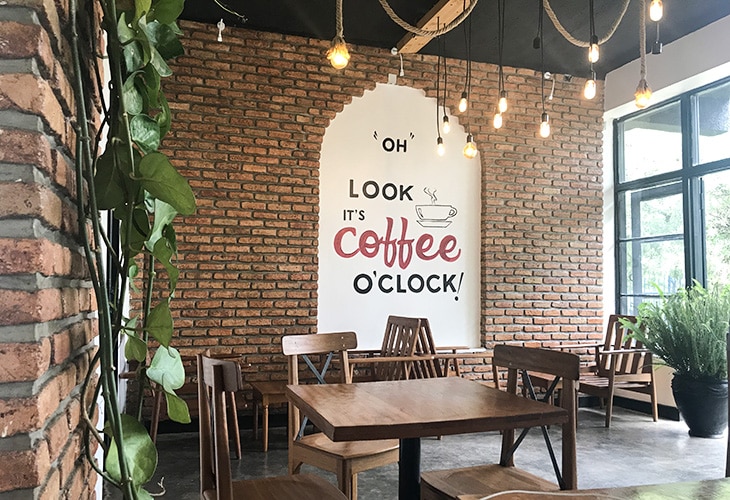 I arrived at breakfast but I’m not so into fruit or omelettes so I went for the spicy tuna sandwich (Rwf 4,000) which comes either on brown bread or a panini. The panini version is huge, the bread was super fresh, and the side salad is very tasty and more than just the usual tomato and onion you get on the side at most places. Unfortunately, there wasn’t anything spicy about the spicy tuna sandwich. The arugula (which, I suppose, is meant to be the spicy element) was missing and they snuck in some plain ol’ lettuce in its place.

I spiced the tuna up with some Sabana hot sauce (bonus points for having this amazing sauce as an option!) but it was frustrating that one of the two main ingredients listed on the menu wasn’t on the sandwich. I don’t actually like arugula so I was kind of happy, but if you want to actually get what you’re ordering maybe double check they have the ingredients. Cafes and restaurants not having what’s listed on the menu is a source of endless frustration for me in Kigali – if you can’t consistently supply an ingredient, don’t put it on your menu, people! But it was super tasty so all is forgiven. 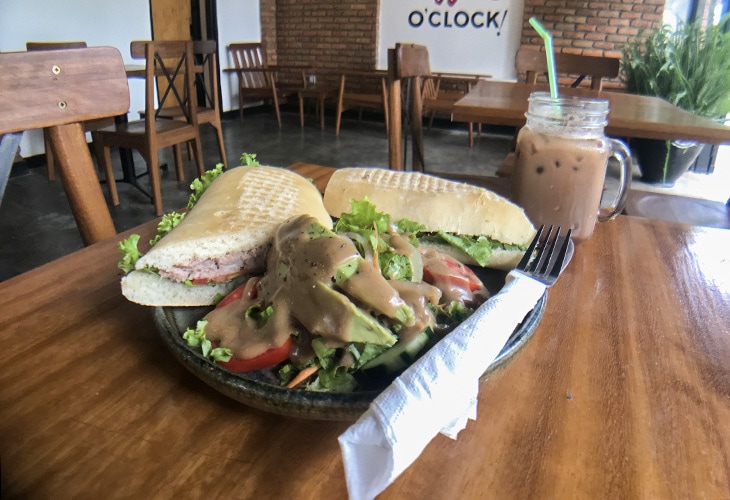 I think the Kigali Art Cafe menu is a bit more interesting than the average cafe in town with a small but enticing selection of breakfast options, soups, salads, and burgers. The Kigali Art Cafe Special (Rwf 5,500) looks like a great way to start the day with an omelette, fruit, and even avocado toast. Besides the tuna sandwich, you can get chicken avocado (Rwf 4,500) and the slightly more unusual option of grilled veggies and hummus (Rwf 3,500). For salads, your choices are tuna (Rwf 5,000), Greek (Rwf 6,000), and chickpea (Rwf 4,000), all of which seem to go above and beyond the usual salad ingredients. Then there are a couple choices for soup (Rwf 5,500) – pumpkin, carrot, ginger (made with coconut milk!), and green vegetable. 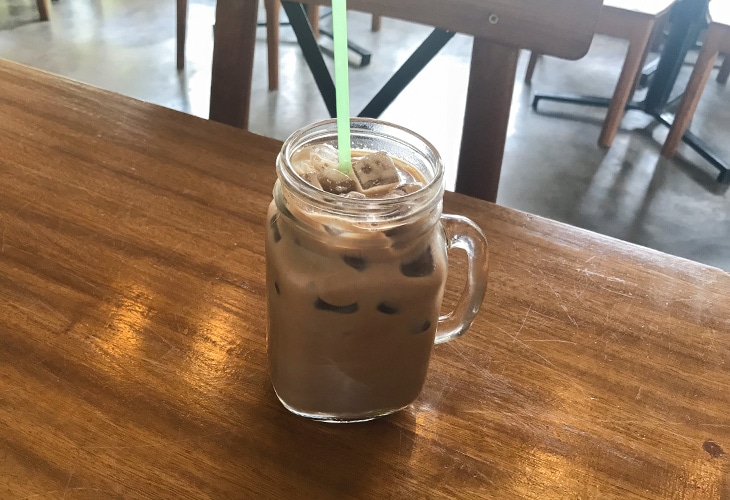 Iced drinks range from Rwf 2,000 to 3,000 and include some things you don’t often see elsewhere like iced lemon ginger tea, iced hibiscus tea, and even iced chocolate seems rare here in Kigali. I opted for my usual iced mocha (Rwf 3,000) and it’s once of the finest in Kigali. I like to think I know my iced mochas. The chocolate is more bitter than sweet and I really like that.

They’ve also got a great selection of fresh juice and smoothies (Rwf 2,500 to 4,000) including a few smoothies with spinach, carrots, and beetroot and a bunch that have strawberries in them. They’ve got some really tasty looking recipes and I wanted to try them all but I opted for strawberry lemonaide (Rwf 2,000) instead. There are only so many liquids I can consume in one visit and I’ve got a few smoothies marked for the next time I stop by.

Kigali Art Cafe have all of the usual hot drinks on offer, starting at Rwf 1,500 for a coffee or an espresso, all the way up to Rwf 3,000 for an African coffee. African coffee is one of these drinks that seems like a hidden secret – espresso, ginger, chocolate… I mean, how is it not a worldwide thing? Bourbon Coffee were the first people to open my eyes to this wonder (though their cafes in New York, Washington, and Boston don’t even serve it… madness!) and I was happy to see it on the menu at Kigali Art Cafe. Of course, it was delicious because how can you go wrong with those ingredients together? 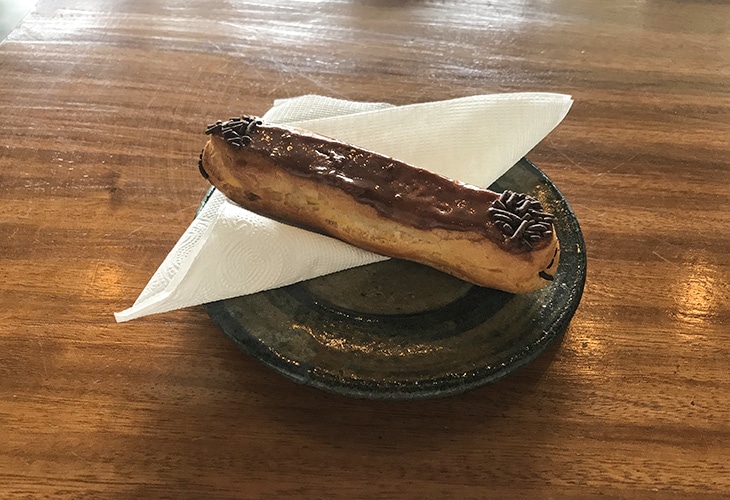 For dessert there’s a small selection of pastries in a display case. The eclair (Rwf 1,000) is pretty good, though if it’s an eclair you’re specifically after, I’d head to Baso Patissier instead which are impossible to compete with. But as a tasty treat at the end of your meal, Kigali Art Cafe’s option is a good choice.

Overall I’m really impressed with Kigali Art Cafe. The vibe here is really nice, staff are friendly, the coffee and food are really good, and you can find a bunch of things here that aren’t in other cafes around the city. The staff could be a little more attentive and the bathrooms could be cleaner, but those are simple fixes that hopefully they’ll work on over time along with solving the arugula/lettuce tuna sandwich situation. But for a relatively new place, I was super impressed!

Give them a try next time you pass by and let us know what you think in the comments below.