Inema still has a cafe but it’s more focused on drinks than food.

Praise be to whichever deity you worship for Chef Carlos is back! Lovers of soup, sandwiches, and luscious desserts rejoice! We were lost there for a little while after his excellent restaurant, Paladar Venceremos, closed down to search of a new location. It was a few months longer in the making than we’d hoped, but Carlos has sprung back in a big way at the Inema Art Centre with his new place, the aptly-named, Inema Cafe.

Paladar Venceremos was a regular on my ‘lady who lunches’ schedule. I missed it when it closed and know I wasn’t alone. It was one of the more innovative places in Kigali and the emphasis on using fresh local ingredients didn’t go unnoticed. You’ll be happy to hear that Inema Cafe continues this high standard and the menu is familiar for old Paladar fans. Sadly, the serve-yourself salad bar is gone, but you can still order a generous pre-prepared salad (Rwf 4,000) and my old soup and sandwich favourites are back too. 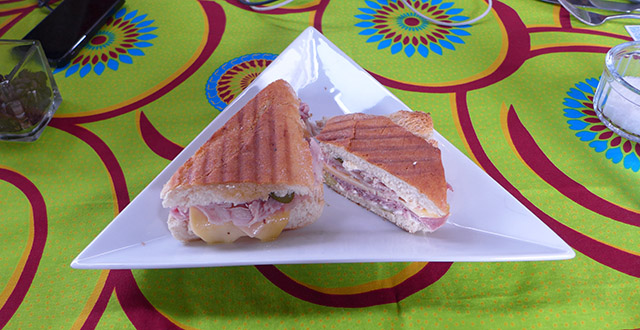 On my first visit, I had the Havana Cuba (Rwf 5,000) which was really good. Super simple with a ham, cheese, garlic mayo, and pickles but an excellent combo. There’s always a veggie option and this week it was the Cali-fornia with roasted peppers, zucchini, garlic spinach, and pesto for Rwf 4,500.

I’m going to make a bold statement right now and say that Inema Cafe makes the best sandwiches in Kigali. There. I said it. Brachetto also do a great selection of sandwiches, but I’ve always thought them to be a bit heavy on the bread. Inema Cafe’s bread-to-stuff ratio (yes, that’s a thing) is perfect. If anything, some of the sandwiches have too much filling. But too much filling isn’t a thing, so it’s ok. The bread is super fresh and usually toasted to perfection in their sandwich press, depending on which one you order. 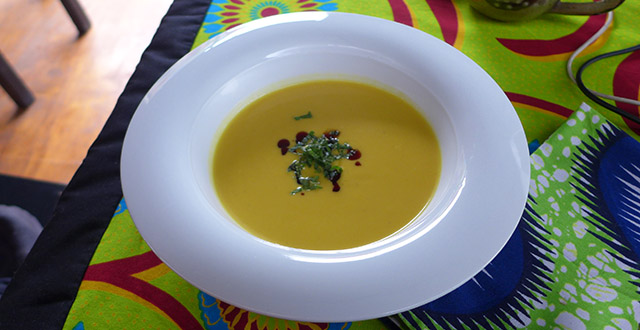 I could be mistaken but prices seem a bit higher than they were at Paladar Venceremos. Well, they seem to be the same except at Inema Cafe you’re charged an extra Rwf 1,500 for a side of plantain chips where at Paladar they were included. But I guess that’s bound to happen when a business moves from operating out of their house to renting a space from another business. But for the quality of the food, I can’t complain too much about the price. My good-sized sandwich and a bowl of delicious creamy butternut squash soup cost Rwf 6,500 which might be considered pricey for a Kigali lunch but I can say that it’s totally worth it. They even have a coffee loyalty card so if you buy ten you get one free. Bargain of the century! Well… perhaps not. But a nice touch, nonetheless. 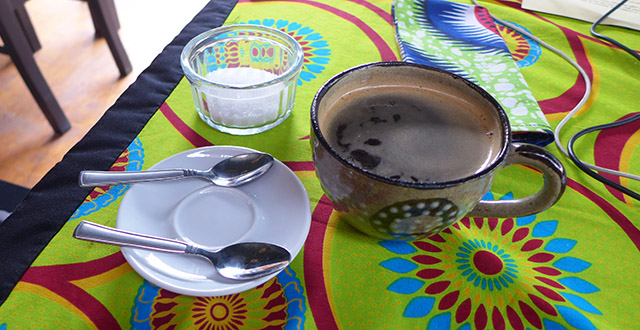 The setting is really nice and the cafe is a perfect addition to the Inema Art Centre. Great art and great food! A fine combination. The cafe is open on two sides and has a nice view from the hills of Kacyru across the valley. A breeze blows through and it’s just a really sweet space. With only six tables and seating for about 26, it’s not a huge place so it might be a good idea to make a reservation, especially if you’re more than four people. The music has a Cuban flair and is toe-tapping good and is set to a perfect volume.

One of my favourite things about how Carlos runs his restaurants is the variety in the menu. Things change every couple of weeks with a new small selection of sandwiches, a different kind of soup, a new salad, and other desserts becoming available with each menu change. Inema Cafe regulars will notice that there’s a regular rotation which means that that amazing salad you had last week will eventually resurface again in a few weeks, so no need to fret! 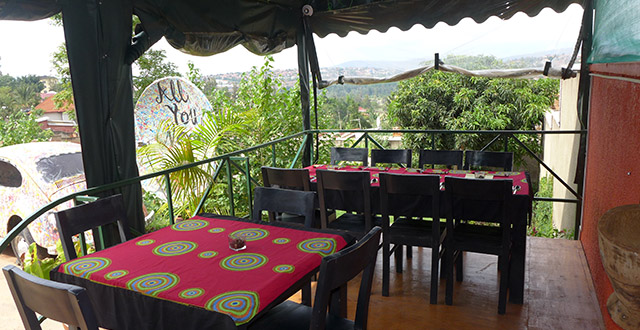 For those of you who prefer something a bit boozier, they’re open later on Thursdays and host a cocktail night with regular mojitos and a rotation of other drinks. The kicker? It’s buy one get one free from 6 and 7pm. A fine excuse to get nicely buzzed after work! Plus they occasionally host live music, to boot. Keep up to date on what’s happening at Inema Cafe by checking in with my events calendar.

In case you can’t tell, I’m a big fan of Inema Cafe and of Chef Carlos’ food in general. It’s nice to have a highly trained and experienced chef coming up with a creative menu and making my food. Kigali seems to be attracting more and more chef-owners these days with Brachetto, L’Epicurien, and Poivre Noire some other prime examples.

Free ingredients, consistent food, nice service, and an art gallery at it’s door! I’m a fan. Check out Inema Cafe and let me know what you think!