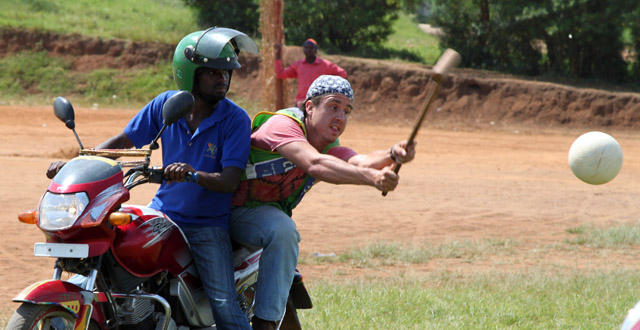 Kigali is the kind of city where you have to make your own fun… but this is ridiculous! Well… ridiculous with a bit of creativity and a lot of crazy thrown in. The creation of this unique pass-time has been talked about a bit in this New York Times article so I’ll let you read that for the history and I’ll focus on the ‘wheres’, ‘whens’ and the ‘what the hells?’

I’ve heard rumblings of the existence of moto polo since my arrival in Kigali over two years ago. I was intrigued but also not totally sure it was real. I didn’t know anyone who played or even who’d attended it… so I chalked it up to being a crazy rumour and went about living my moto polo-free existence. Until a few of weeks ago…

So what is this crazy sport, exactly? The quickest explanation ever is people on motos with sticks whacking a ball. I’m not sure there are many other rules involved… I guess you’ll have to play to find out. Games are played on a football pitch just past the airport on the left. You can’t miss it. There are a couple of teams of regular players (guys and girls play together) but if there are enough people interested, more teams are created on the day. The fee is Rwf 15,000 which goes to your moto driver to cover his time and petrol. The game’s creators bring the ball and polo sticks and the moto drivers have helmets. All you have to do is show up with a little bit of ‘crazy’ coursing through your veins. 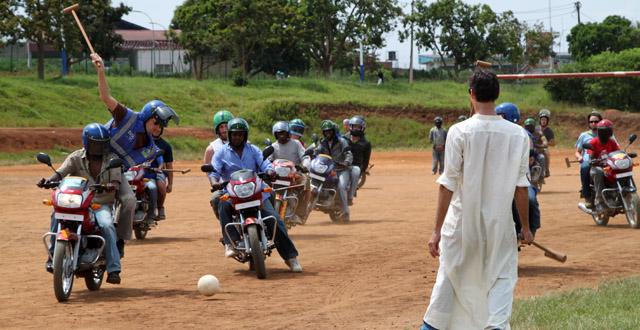 The setup is all pretty casual and laid back. The games start when everyone is ready to play… around an hour after the decided meetup time which is usually around noon. Enough time to figure out the teams, drink a beer and have a quick catchup with friends. There’s no set schedule but games are often arranged every couple of months on umuganda Saturdays, or whenever the main guys feel like organising one.

When I finally did make it to my first match, I went terribly unprepared. On a hot day with the blazing sun beating down, I arrived without any water or sunscreen and realised that if I wanted any shade, I’d have to crawl under the pickup truck with the dogs. I chose not to do this… although I considered it briefly. This lack of preparation meant that I had to flee the sweltering pitch early so I missed out on the final game. So if it’s sunny, BYO water, sunscreen and shade! Bringing cold beers will make you popular.

So yes. Moto polo does in fact exist. From a spectator’s point of view, it’s a really fun afternoon. If you’re playing, expect a REALLY fun afternoon. During the halftime break and after the match you can see how pumped up the players are. It looks like a great time for those of you who aren’t wimpy like me.

I’m not sure when the next game is, but when I know, you’ll know. Check either my events calendar or my Facebook page to find out when the next moto polo gathering will be.