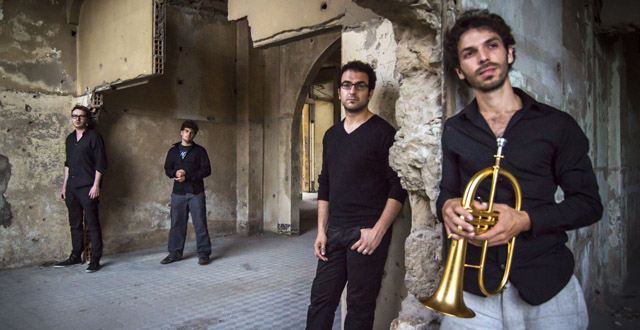 The Goethe-Institut have yet another great event for us this weekend with a free concert at Serena with the German-Lebanese jazz band, Masaa. Peter from Goethe gives a bit of background on the band and their trip to Africa followed by a few interview questions to get you in the mood for some great music. See them perform on Friday, November 22nd at 7pm at Serena Hotel… for free!

The birth of the jazz group Masaa is one of the recent success stories from the German Lebanese music scene. It happened in the East German city of Dresden, famous for its opera, the castle and the monumental Church of our Lady that three students from the conservatoire came across each other in the lecture halls of their school: trumpeter Marcus came from the Northern German city of Schwerin, Demian the drummer from the Rhineland and Dresden born pianist Clemens who was still living at his parents’ house. Curious to know how it would sound when they joined for a rehearsal they met in one of the thirty rehearsal rooms at the conservatoire. The artistic result was terrific. And as it turned out in the following months true friendship also created harmony between the three.

Drummer Demian had always been interested in the music of other cultures. He had travelled to countries like Kosovo, Taiwan, Lebanon, Bulgaria, Romania and Morocco. Impressed by the sounds of foreign cultures in 2007 he started up a new series of jazz concerts called the Feature Ring. One of his guests was the Lebanese singer Rabih Lahoud who, at the age of 19 had decided to leave his native city of Byblos in the Middle East to study music in Germany. In Lebanon he was taught the liturgical songs of the Maronite Church in the old languages, using Arabic maqams (traditional melodic modes). In Germany Rabih discovered his passion for various styles of singing. He performed as a singer, became a choirmaster and vocal coach and professor for singing.

Rabih was the perfect match for the three German musicians. In 2011 their piano and trumpet sound received decisive enrichment by Rabih’s orient imbued canto. Masaa became the young up-and-coming band that took the German jazz scene by storm in 2012. Within a year Masaa already won two jazz prizes and played two sold-out concerts at the renowned Berlin Jazzfest. Their music ranges from contemporary jazz and world music to pop, combining these musical elements with Middle Eastern sounds and Arabic poetry. “Emotional and probing the depths of sounds – Masaa dance the dance of freedom in a self-assured and unbridled manner…” as stated a Jazz magazine about the German-Lebanese band.

The Goethe-Institut/German Cultural Center decided to organize a tour in East Africa for them. Starting in Addis Ababa, their second venue will be Kigali followed by Harare and Maputo. Kigali is especially exciting for the four musicians since they had already heard about the beauty of the “Switzerland of Africa” on the 1000 hills and its rich music traditions. Percussionist Demian had transcribed rhythms of pygmy groups from Central Africa when he studied at the conservatoire. And as everybody knows, the music of the Batwa is one of the pillars of Rwanda’s music traditions.

If the success story of this German-Lebanese band and the extraordinary sounds they produce are not sufficient reasons to come to their concert, here comes an extra strong bonus:  Inshongore, a Rwandan group of three female and two male singers which was founded in 1995 will be featured as the concert’s special guest. They are one of the most powerful representatives of Rwanda’s polyphonic chanting. Come and hear the extraordinary lead singer Betty Umulisa with Immaculée Mukandoli, Christine Mukahigiro, Vincent Uwinkwavu and John Karemera!

Here are five questions for the musicians of the German-Lebanese music group Masaa:

How will you win the Rwandan’s hearts?

We love so much making music and there is so much artistic passion between the four of us, that this energy transfers to the audience with ease! Also we like to experiment with new sounds on our instruments (voice, trumpet, drums & piano).

On the occasion of the workshop, you will meet Rwandan music groups – what will the possible output be of such an encounter?

These three groups have such a unique way of playing! The get-together will give us the chance to exchange rhythms, harmonies and of course to jam together with lots of fun!

Have you ever had the opportunity to listen to music from Rwanda?

Rwandan singers like Mighty Popo, Ben Ngabo, Jean Paul Samputu or a group like Gakondo have become known in the west. Besides that, the percussionist of our group transcribed rhythms of pygmy groups from Central Africa when he studied at the conservatoire. What a fantastic complexity in rhythmic layers! We are looking forward to meeting artists who have their roots in similar traditions.

What’s the challenge for you to give a concert in Rwanda’s capital Kigali?

So far we have already introduced our music to audiences in Germany and Lebanon (the native country of our singer Rabih Lahoud). Both audiences love our music and the poetic spirit of the songs. The challenge is to gain the Rwandan public’s attention and to make them feel at ease in our musical universe.

In general what do you expect from your stay in Kigali?

It is the first time we travel to Rwanda, and everything will be new – the people, food, lifestyle, architecture and music: all this will be extremely exciting to us!

Interview: Meg from the Kinamba Project

Interview: Hazel Cox from The Earth School
November 19, 2013by Kirsty