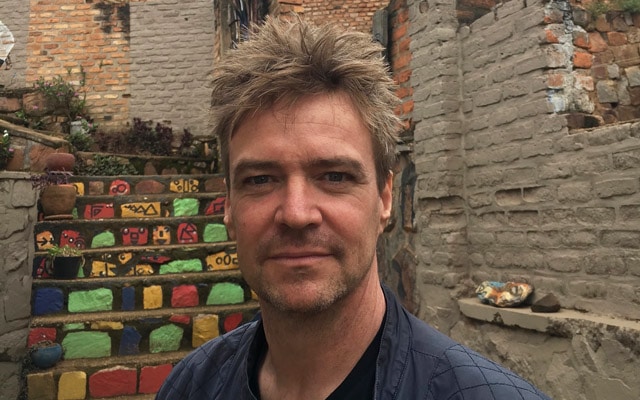 Artist Tom Bogaert is in Kigali for his exhibition at Ivuka Arts. You can learn more about his art in the interview below or check out his website.

Can you tell us a bit about yourself?

I was born in Bruges, Belgium and I worked as a human rights attorney for the UN and Amnesty International until the age of 38. I stopped practicing international law in 2004 and moved to New York City to pursue a career as an artist. I had my first solo exhibition in NYC in 2008 with the legendary ‘Jack the Pelican Presents’ gallery and have since widely exhibited in Europe, the US, the Middle East, and North Africa.

When did you decide that you were an artist?

It was a gradual process and it took a while, but I think that sometime by the end of 2004 I started writing ‘visual artist’ as my profession on visa forms. So that’s maybe when I decided for myself that I was an artist. Almost fifteen years ago now.

What kind of art do you make?

My artistic practice is structured around research-based in situ projects that examine the intersections of geo-politics, entertainment, art, and propaganda. I invent ways to give material form to international affairs while working across a range of media including video, sound, performance, collage, and installation. I pursue my practice by engaging an idea first, and then developing a plan that usually involves a combination of media. I’ve been told that I work in the tradition of the post-conceptual, the post-studio era.

What’s your connection to Rwanda?

Between 1996 and 1997 I documented the aftermath of the Rwanda Genocide on behalf of the UN Refugee Agency. And when I transitioned from law to art in 2004, I made my visual arts debut with “This is Rwanda” a short experimental video in which I embedded footage of the Genocide into the interface of an animated computer game. The film had its world premiere at the International Film Festival in Rotterdam, The Netherlands and was included in several film festivals thereafter.

What can you tell us about your project ‘Dog Day Afternoon’ at Ivuka Arts?

On the occasion of the 25th anniversaries in 2019 of respectively the Genocide in Rwanda and the O.J. Simpson case, I have been thinking for while about doing a project in Rwanda that takes as its starting point the concept of simultaneity.  ‘Dog Day Afternoon’ hopes to explore the Relativity of Simultaneity: the concept that distant simultaneity – whether two spatially separated events occur at the same time – is not absolute, but depends on the observer’s reference frame. This project furthermore interrogates contemporary theories of time.

Do you think you have been successful in translating these rather abstract and theoretical concepts into tangible art?

We have been working hard on a video shot – from the back of a moto taxi! – on location here in Kigali and featuring JMV. Basically it is a low production re-enactment of the 1994 ‘Bronco Chase’ in which O.J. Simpson led police in a low speed chase on a Los Angeles freeway in the now infamous white Ford Bronco. Simpson – a retired American Football star – had been a person of interest in the murder of his ex-wife, Nicole Brown Simpson, and her friend Ron Goldman.

I have also made a series of personalized football shirts that represent a rudimentary timeline of Rwanda’s recent history. The shirts and the video will be the centerpieces of the show at Ivuka Arts Gallery. But I invite you all to come and see for yourself and visit the exhibition. The opening is on Thursday February 28 from 6-9PM and there will be beer and brochettes!

What is the meaning of the title of the project ‘Dog Day Afternoon’?

The project takes its name from the American crime drama film ‘Dog Day Afternoon,’ about a bank robbery on a hot summer afternoon in New York City. The title was mentioned by one of the reporters during the life broadcast of the O.J. Simpson chase and I use the soundtrack of the Bronco chase for the video we have been making in Rwanda. I am sure, I mean I hope it will all make sense when you see the film.

What has the reception been like in the Kigali arts community?

Amazing! This was my first visit to Rwanda and especially the grass roots arts community in Kigali has been incredibly encouraging and supportive.  ‘Dog Day Afternoon’ is a bold and ambitious project on a shoestring budget (partially funded by the Flemish authorities) and the can-do attitude of my colleagues art professionals in Kigali has helped me bring ‘Dog Day Afternoon’ in the public realm, through risk-taking, facilitating discourse, production know-how, and problem solving. I’ll be back!