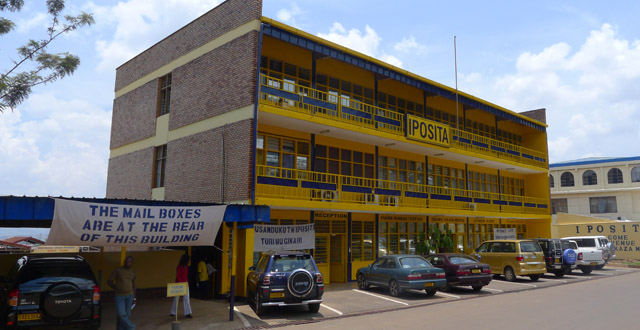 There is one post office in Kigali, and it’s straight down the road from the roundabout in front of the UTC, heading down towards Nyabugogo. It’s a big yellow building with IPOSITA written on it so it’s hard to miss. The office was recently moved here from Kacyiru.

You need to visit the post office to buy stamps and send your letter. Stamps cost a few hundred francs per letter, depending on where you are sending it. The time it takes for the letter to reach its destination varies greatly, from a few days up to a few weeks. It all depends on which flight your letter gets on, and if it gets stuck somewhere in Ethiopia.

For sending bigger packets, the safest option is to use a private postal service such as FedEx or DHL. The FedEx office is located close to Camellia Tea House, along Avenue de la Paix. The DHL office is in Muhima, on the road between the town roundabout and Gitega.

There are few street names in Kigali, and even fewer numbered houses. Letters and packages can thus not be sent to your house. To receive mail you need to first get a P.O. Box, and you do this by paying a visit to the IPOSITA office. The price for a P.O. Box is Rwf 11,800 a year. After getting a P.O. Box, your address will simply be: Name, P.O. Box number, Kigali, Rwanda.

Normally it takes a couple of weeks for letters and packages from the US and Europe to arrive, though I’ve had letters arrive a few days after they were mailed, as well as packages arriving two months later. It’s kind of hit and miss.

Packages that are too large for the tiny P.O. Boxes will be taken to an area behind the building and stored until you come to collect it. You’ll get a note in your P.O. Box that you’ll need to take to a man sitting at a desk downstairs, behind the building. Give him the note and he’ll yell for someone to come find your package. I’ve never needed to show any ID to collect a package… I guess having the note is proof enough. Assuming they find it, you’ll have to pay some taxes (usually very little) and sign your name in a book and that’s that. It’s a pretty quick and easy process and I’ve never had to spend much time waiting in line.

Mail does occasionally get lost, and if you peek into the storage rooms at the post office it’s easy to understand why. If you come to pick up a package, and they say it’s not there, have them check again. And again. It’s most likely in there somewhere, so just keep nagging them!

Cracking the Communication Code in Kigali

kLab – A Shared Workspace for IT Folks
September 27, 2011by Inga