The Bistro at Urban Hotel

Urban Hotel seems to have sprung up almost overnight in Kiyovu, just down the road from Hotel Gorillas. It’s an orange site to behold! All modern-looking with a restaurant perched at the top. The Bistro at Urban Hotel offers up the usual things you’d come to expect at a Kigali restaurant – club sandwich (Rwf 5,800), burger, fish, and a few salads. Plus it’s also got some more interesting choices like the coffee-encrusted steak.

The food was ok. Not great, not bad. Well, the chicken Caesar salad (Rwf 5,000) didn’t get great reviews and the croutons were pretty mushy and gross. My burger (Rwf 5,800) was pretty good. The bun was a bit too huge for the burger, but it came with a pickle on it and the usual fixins’, so that was a nice bonus. The fries were good but they skimp a lot on the ketchup and mayo so if you like your condiments, you might as well ask for extra straight away. The bruschetta (Rwf 2,500) was unusual, with more avocado on it than tomatoes, but really tasty. 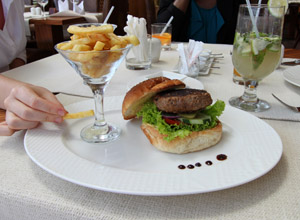 A friend had the very strange request of putting chicken onto her mozzarella salad. I know… weirdo! But, after some odd looks, the salad did indeed come with chicken on top. It looked tremendously unappetizing to my discerning palette but she enjoyed it and I guess it’s good to see them able to take on alterations to the menu, no matter how bizarre. Another nice service touch was having the manage come out to suggest that two bruschetta bread orders might be too much for two people. We opted to share one instead, thanks to her advice and it was the right choice.

The service was pretty good for Kigali but could use a little work here and there. The drinks took ages and then when two were ready, they sat on the bar for about 15 minutes while they made the third cocktail after getting the original order wrong (bringing a Primus instead of a Pimm’s). Maybe it’s some service thing that all drinks have to come out at once but it’s frustrating to see your lovely mojito (Rwf 6,500) sitting on the bar for ages while the ice melts and your thirst grows. Especially when you ask them to bring it only to have them leave it there and tell you it’s coming soon. But the drinks were worth the wait. The mojito was really good and the margarita (Rwf 6,000) got good reviews as well. This place has a lot of drinks on offer, much like Zen. I’ve heard they’re run or owned or something by the same people, so whoever runs these places knows how to mix a pretty good cocktail. 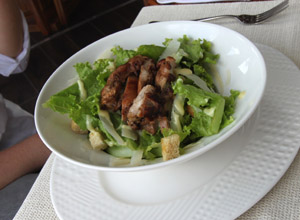 Not completely sure what to think of The Bistro after my first visit, I’ve since been back twice. On my second trip I ordered the chicken wings with blue cheese dressing and the bruschetta again. The chicken wings were tasty but the dressing didn’t have any traces of zingy blue cheese. I’m not sure what it was but it wasn’t cheesy at all which was a disappointment. The bruschetta was still a hit with me but this time they changed it up and the avocados were gone. On my third trip I stuck with the usual bruschetta which was, once again, good. Feeling a little dangerous perhaps, I branched out a bit and ordered the cheesy potato skins with minced meat and they were decent.

In my three trips to The Bristro I wasn’t overly impressed but I wasn’t disappointed, either. My meals were all ok, the service was attentive but not necessarily super professional (but they seemed to be trying hard), the cocktails were good and the view is excellent. I’ve spoken to a few friends about this place to find that some are pretty impressed and others don’t have anything good to say about it. My experiences so far have been good and the view and atmosphere are nice so I’d recommend giving it a try to make up your own mind.