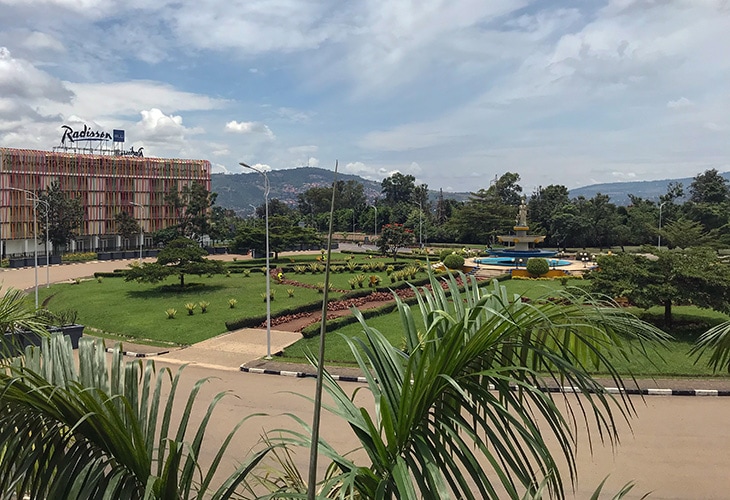 Getting around a new city is hard enough without adding challenges like language barriers and the total lack of street names – both of which are the case in Kigali. Having always shunned public transportation in foreign cities, I quickly fell in love with the motos.  Despite limited knowledge of Kinyarwanda and names of areas, you’ll usually be able to reach your destination without problem: all you need to know is the nearest landmark to where you’re going, and you’re good to go. Following is a list of Kigali landmarks worth knowing when explaining to a moto- or taxi driver where you want to go.

The Union Trade Center in town is one place you’ll end up going no matter how hard you may try not to.  This is where you find Nakumatt, Bourbon and all the other delightfully expatty waterholes in Kigali.  If you’re white, most moto-, taxi- and bus drivers will assume town is where you’re going anyway, but if you want to emphasize your destination further, any of the following words will do: UTC, town, or ‘moo mooggee’ (phonetics for ‘to town’ in Kinyarwanda.)

If you’re taking a moto, try to avoid using ‘Serena Hotel’ to describe where you’re going, as they’ll charge you ridiculous fares. To describe how to get around in town, however, the Serena is a famous landmark most people know where is.

The Gorilla roundabout is right between UTC and Serena, and might not be known by moto drivers as much as expats. For road description, though, it’s worth adding to your landmark-list.

There are several mosques in Kigali, but the most famous one is the big green one in Nyamirambo.  This landmark makes its way into most road descriptions in Nyamirambo, and for moto-purposes it’s always smart to know where the mosque is in relation to where in Nyamirambo you’re going.

So Sonatubes is actually the name of a tire factory situated right before the turn into Kicukiro Centre, but it has somehow made the transition from landmark to legit place name— there’s even a bus stop called ‘Sonatubes’.  When you’re explaining the way from town to places like Gikondo and Kicukiro, it’s smart to include Sonatubes in your description, as this is a place all Rwandans know.

When explaining the way to places in the Kisiment/Remera area, the hotel Chez Lando is always a smart place to start.  All moto drivers will know this place (at the top of the Kisiment hill), and will hopefully be able to understand where you’re going form there.

Obvioulsy, the giant stadium is a wise landmark to remember. If you’re headed to Remera, always ask where the stadium is in relation to your destination, and you (and your moto driver) will be sure to find the way.

When you already passed Chez Lando and Amahoro Stadium, and need to go further into Remera, the Kimironko Market is a good landmark to know. The big fenced-in market is well-known by all moto-drivers, and will quickly get you to Kimironko centre.

When you tell your moto driver you want to go to Kacyiru, there are several roads he can go, depending on whether you’re final destination is closer to the top (Post Office), the middle (Novotel/Laico), or the bottom (USA Embassy).  Be sure to include one of these landmarks before he starts driving, to save both time and money.

B-Club was a popular club before it burned down, and is still widely used when explaining the way in the Gacuriru area (even though it now has turned into a small supermarket). Any moto driver will know ‘B-Club’, so make sure you are able to explain where you’re going in relation to there.

Moto driver usually struggle with restaurants in Kimihurura, but if you make sure you include ‘Papyrus’ in your description, you’ll end up at the right place.

As is the case in Kimihurura, moto drivers usually don’t know many restaurants in Kiyovu. When you’re explaining the way, use ‘Milles Collines’ as a starting point (at the top of the hill), and take it from there.

For moto-purposes, ‘KBC’ is the best thing to use when directing a driver around Kacyiru. For expats, the ‘wedding roundabout’ is widely used, because this is where— for some bizarre reason— every Rwandan couple come to take their wedding photos.

Things to Pack for Kigali

Why Kigali is Paradise